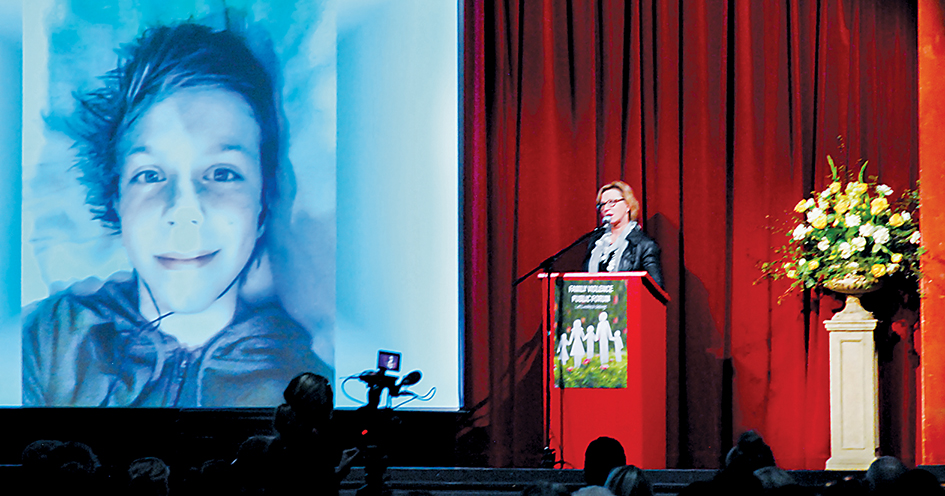 MORE than 500 people including senior police, politicians and community leaders, packed Mornington’s Peninsula Community Theatre last week in an overwhelming show of support for the campaign to turn the tide against family violence.

Emotions ran high and many a tear was shed as the audience heard shocking details of the effects family violence was exacting on the community.

Peninsula Voice president Peter Orton said organisers had been overwhelmed by the community’s response to the forum, with 540 guests attending and hundreds more having to be turned away.

He was especially pleased with the level of official response, which included a large contingent of serving police officers attending.

“There were about 25 senior police filling the front rows of the venue, including members of both the Frankston and Mornington family violence units,” he said.

“Some of these members would have been the first on the scene of the Tyabb cricket training session earlier this year [where schoolboy Luke Batty was murdered by his father].

“It was inspirational to see such a high quality event, organised and funded completely by volunteers and community action.”

Most guests agreed the passionate speech delivered by Luke’s mother Rosie Battie was the highlight of the forum.

“Many said it was an absolute privilege to witness such highly emotive presentations, particularly Rosie’s,” Mr Orton said.

“Young Luke’s image beamed out on the big screen as Rosie delivered a heartfelt plea for change to the many lives which are damaged by deaths like that of Luke. “There were moments where it was difficult to see a dry eye, senior police included.”

Ms Batty told the audience she was determined the death of her son would not be in vain and that family violence had at long last emerged as a major political issue in the lead-up to November’s state election.
She said the focus of domestic violence need to shift from blaming the victims to addressing the behaviour of the perpetrators.

Domestic violence was an epidemic within our society and every woman and child was potentially a victim.

Mr Lay agreed that the emergence of the issue onto the political stage was a major step forward, but added that “all reform in the world will have very little impact if we do not change some men’s culture”.

“We must educate young men. We must make it very, very clear to our young men that there’s no occasion where violence against women is understandable or acceptable.”

Mr Lay said that as men, “we have to start having hard conversations with our mates, our sons, our colleagues and our team mates”.

“We need to change the language, the attitude and the misogynistic behaviour that lies at the heart of male violence against women.”

Ms McCormack said the “sexist attitudes” embedded in our society lay at the heart of domestic violence and called a major shift in attitudes towards women.

Mr Vlais agreed, calling on men to drop their attitude of entitlement towards woman and attempting to justify their violent behaviour.

Their comments preceded the release of alarming national survey last week that showed many Australians were ready to excuse rapists and men who control, intimidate, bash and kill women, preferring instead to apportion blame to the victim.

The VicHealth survey found one in five Australians agree that a woman is partly responsible for rape if she is intoxicated, and one in six support the “deplorable notion” that women may mean ‘yes’ when they say ‘no’.

VicHealth surveyed 17,500 Australian about their views on violence against women and gender equality.

“We are really concerned about the number of people – men and women – who still believe that rape and physical violence are justifiable, and that women are often partly to blame,” she said.

“A culture that excuses rape and violence is one that allows it to happen.

“Perhaps most worrying for VicHealth, which has been working to prevent violence against women for almost a decade, is that nearly two-thirds (64 per cent) say that violence is caused by men being unable to control their anger.

“And nearly half (43 per cent) believe men rape because they can’t control their need for sex.

“These beliefs demonstrate just how far we have to go before our society understands the nature of violence.

“Allow me to make it very clear. Violence is a choice, not an instinct. And it is never excusable. It’s always a crime. And no woman ever invites or deserves it.”