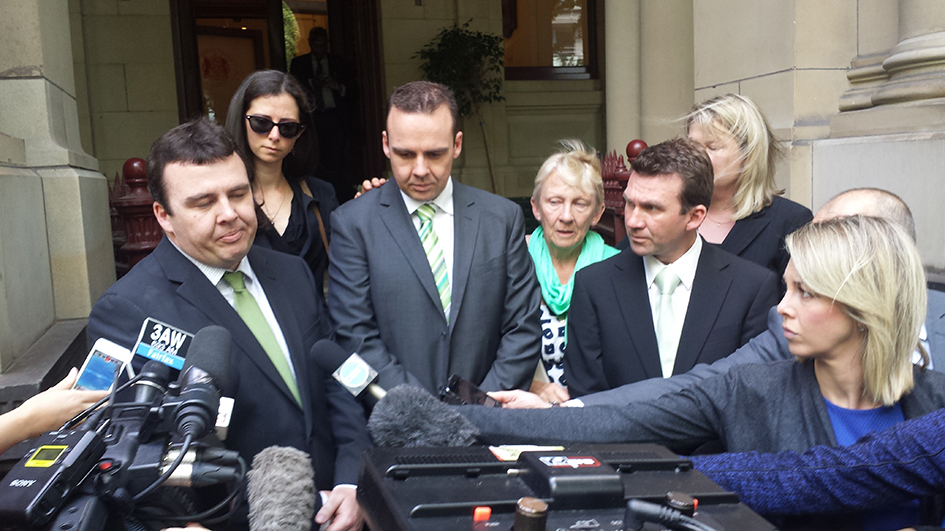 THE family of murdered Hastings jeweller Dermot O’Toole have spoken of their devastation over the 27 year sentence handed to his killer, Gavin Perry.

Minutes before, Supreme Court Justice Elizabeth Hollingworth handed down the sentence requiring Perry to serve a minimum of 23 years before being eligible for parole.

Ferocious weather had delayed the arrival of Perry in court.

When he was finally led in, the 27-year-old was wearing a shabby blue shirt and pink striped tie, slightly askew.

He could not make eye contact with members of the O’Toole family or their supporters, as they were obscured by a partition to his left.

Flanked by two correctional officers, Perry showed little emotion during the proceedings and stared straight ahead with his hands clasped in front of him, moving only to take an occasional sip of water. Justice Hollingworth began the sentencing by describing the lead up to the murder.

Perry and his then girlfriend, Rhiannon Bailey, had gone into the jewellery store earlier on the day of the murder, staying for about five minutes.

The judge went on to detail how Perry returned to Hastings later that day and stole a knife from the Safeway supermarket at 4.38pm.

“You then entered the Jewel Shed just before 5pm. You produced a large carving knife from inside your tracksuit pants.”

The ensuing confrontation between Mr and Mrs O’Toole and Perry lasted little more than 30 seconds but left Mrs O’Toole badly injured and Mr O’Toole dying on the floor of the store.

After an initial skirmish with Mrs and Mr O’Toole Justice Hollingworth said Perry “pushed Mr O’Toole again, and he slipped over onto his back”.

“He put his feet up towards you in a defensive manner. You moved around to Mr O’Toole’s left shoulder area, and stabbed him twice in his upper chest with the knife”.

The judge made note that, at the time Perry stabbed Mr O’Toole, he had ample opportunity to leave.

But instead, Perry had “moved around his legs and body, moving further into the store, in order to reach over and stab him”.

“The fatal stab involved you thrusting the knife into Mr O’Toole’s chest to the full depth of the blade,” Justice Hollingworth said.

Mr O’Toole briefly got to his feet before collapsing to the floor. A number of people rushed to his aid and tried to resuscitate him, but he died at the scene.

Perry then fled, pursued by a number of people who happened to be nearby. One noted the registration plates of the vehicle Perry left in; a silver Commodore.

Mrs O’Toole was taken to Frankston Hospital after the attack. She was treated for multiple lacerations – including to her left elbow and forearm, her back, and her left ear and forehead – as well as bruising to her chest area. She required suturing, and underwent plastic surgery in relation to a number of these injuries.

The judge made note of the mental scars suffered by Mrs O’Toole, as well as the physical ones.

“Not only was Bridget O’Toole physically attacked herself, but she had to watch her husband of 41 years die in front of her, after he came to her defence.

“She has become very fearful and hyper-vigilant. She has been diagnosed as suffering from post-traumatic stress disorder. She feels guilt at having been the one who survived”.

The judge described the CCTV footage of the incident as that of someone “acting in a fast and frenzied manner, entirely consistent with somebody on ice”.

Perry later admitted he was high on the drug at the time, but the judge said that was not a mitigating factor given his “habitual usage of the drug, and the fact that you knew how it made you behave.”

Justice Hollingworth went on to say that “sometime after 5pm that day, you enlisted Ms Bailey’s assistance to get some petrol and a lighter, and to accompany you while you set fire to the Commodore on some vacant land at Crib Point”.

“The two of you then went home in Ms Bailey’s other car.

“Afterwards, she reported to police that the Commodore had been stolen, as you had directed her to do.

“You did this to try and avoid being linked with the Jewel store events”.

In the first robbery, Perry entered the fast food outlet just after 11am and demanded money from the 19-year-old store manager, telling him to open the safe or he would “stab [his] eyes out”.

In the second armed robbery, less than a week later, Perry entered the Money 3 shop with a bag containing a “solid object”. He held the bag towards the staff member, making out that it contained a gun, and told him to put the money in the bag or he would “blow [his] f***ing head off”.

That robbery netted Perry about $3000.

The judge spoke of Perry’s troubled upbringing and his “anti-social personality disorder”.

His first court appearance was in July 1999, at the age of 12 years old. By 13 Perry was living in foster care.

Since the age of 13, Perry has spent a large part of his life in juvenile and adult detention.

“You have a long history of criminal offending,” Justice Hollingworth said.

Perry had more than 200 convictions for offences, mainly involving property, and had been sentenced to six years for armed robbery in February 2010.

He had been released on parole from prison on 7 February last year and was still on parole when he committed the spate of armed robberies culminating in the death of Mr O’Toole.

Hinting at his anti-social tendencies inside prison, Justice Hollingworth noted that Perry has been held in protection throughout the term of his current imprisonment.

He is housed in a single cell, allowed out of his cell for two hours each day, worked as a billet, and was only able to mix with a limited group of prisoners.

The prosecution also tendered recordings of 21 phone calls between Perry and Rhiannon Bailey during the time period July 2013 and April 2014.

During these calls, Perry vigorously protested his innocence to Bailey, but on 30 March this year he told her that he had pleaded guilty, because there were “just too many statements” and the DNA had come back positive.

The judge pointed out that during the phone calls Perry never showed “even the slightest concern for Mr O’Toole and his family, far less any regret or remorse for what you had done.”

In sentencing Perry, Justice Hollingworth noted that the charge was downgraded from “common law murder” to “statutory murder”; a charge that reflects that “the prosecution [did] not allege that you stabbed Mr O’Toole with any intention to kill him or cause him really serious injury.”

“Instead the prosecution case is that you intentionally caused his death, by an act of violence done in the course of furtherance of committing the armed robbery.

“The court is obliged to sentence you in accordance with the charge which the prosecution has chosen.”

Justice Hollingworth, when outlining the sentencing, said “You are entitled to a discount on the sentence to be imposed upon you in recognition of your plea, and its utilitarian value.

“Your plea has facilitated the course of justice. The community has been spared the time and cost of committal hearing and a trial of these charges against you.

“The family and friends of Mr O’Toole have been spared what would, undoubtedly, have been a very traumatic trial.”

She also sentenced him to five years for each of the earlier armed robberies.

Due to the links between the charges, there was considered to be “concurrency” between sentencing resulting in a total sentence of 27 years imprisonment for all charges.

She said that if Perry had not pleaded guilty, he would have been sentenced to a total of 32 years imprisonment, with a minimum non-parole period of 27 years.

Other than the O’Toole family and their large number of friends and supporters, there was at least one other person unhappy with the term imposed.

Perry, while being led away from the courtroom tore his neck-tie off in apparent disgust at the sentence.