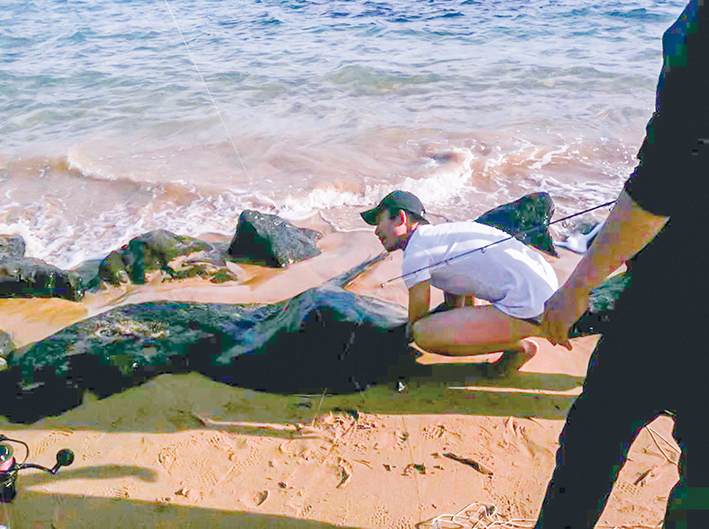 THE attempted killing of a large, resident stingray near Portsea pier has angered Portsea beachgoers who want significant species, such as this, protected.

Jackie Younger, a coordinator at the Bayplay Retreat, said a group of about 10 men caught the smooth-back ray while fishing off the pier and hauled it up before dragging it back down to the beach – presumably to kill it.

She said the men were “laughing and taking pictures” of the ray which was “many feet across”.

A “very angry” Ms Younger confronted the men and demanded they return it to the water.

“I am normally even handed, but they were tormenting the poor thing which has lived under the pier for years,” she said.

“I was crying and shouting at them to help me get it back in the water before it died, but they couldn’t care less.

“I tried to scream them into action. Then, one of the men agreed to help me but it was really heavy and we had lots of trouble getting it back.

“Hopefully it is still alive.”

Ms Younger said the stingray was “interesting because it still had its barb on – whereas most rays living near busy beaches have had their barbs cut off”.

“I certainly hope it survived. It had been out of the water for a long time.”

The rescue came at a cost. Ms Younger said she was whipped across the leg by the ray’s tail – luckily not the barbed section – and she was still sore a week later.

Portsea business woman Sally Williams, who lives in Blairgowrie, was appalled when she heard the large ray had been caught – and nearly butchered. “These creatures are part of my life,” she said. “As a resident I have a passion for the pier and all the sea creatures that live there and this is not what we want.

“We want to preserve them.”

Marnie and Terry Dean, who run the Portsea milk bar, were also alarmed at the ray’s capture. “I watched the men drag it along the pier. They had a rope around it and were laughing and carrying on,” Mr Dean said.

“I said to myself, ‘This doesn’t look right’, and then I saw Jackie jumping up and yelling at the men and so I took some photos.”

Marnie Dean believes the ray was probably one of two which have been living under the pier for many years. “We hope it got away ok,” she said.

Mornington’s senior Fisheries Victoria officer Rod Barbour confirmed it was legal to catch rays if they were to be “used” – but not if they were “to be left on a pier or beach to die”.

“Yes, they can be eaten and they are regarded as a delicacy by some cultures,” he said.