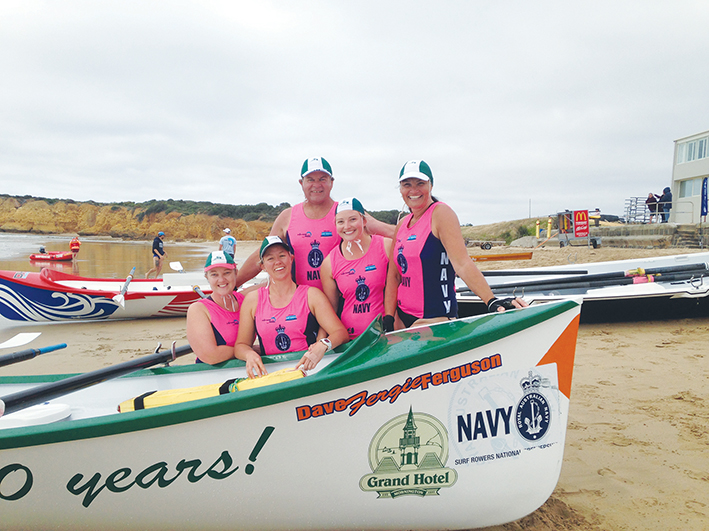 One of the paddlers fell from the craft and his partner did not have the strength to lift him back in. A strong south-westerly wind was blowing them further out to sea.

Luckily, the men can were spotted by a Mornington Life Saving Club women’s boat crew out on a routine training session.

Sweep Andrew Kelly saw the men, aged about 22, about 500 metres offshore and guided the surf boat to their rescue.

Crewmember Susanne Archbold said the boat crew had planned to be out on the water an hour earlier and may have been back at the clubhouse when their help was needed.

“You don’t realise how windy it can be out there when you are on the beach,” she said. “The men said one minute they had been on the beach and the next they were surprised at how far out in the water they were.”

The lifesavers “took a couple of attempts” to haul the man aboard after he had been in the cold water “for quite a while”.

Ms Archbold said her mother’s instinct kicked in when he prevaricated: “I said, ‘Hold my hand now.’ and we pulled him in.

The kayak was tied astern and the crew rowed the men – both Indian students living in the CBD – back to shore.

Ms Archbold said one had been kayaking once before, while the other had never been out on the water. Both were non-swimmers.

“They had lifejackets on but the one in the water was too startled by the whole episode to get back on board; he was a bit grey,” she said.

“They remained calm the whole time; they were not panicking, although the one in the water told me later that he had been ready to give up – to just let go and drift away.”

That’s not something you say to a life saver who has just rescued you: “I made him promise to start swimming lessons this week,” she said.

The kayak was returned to Mornington Boat Hire and the men wrapped in space blankets until they were deemed capable of driving home.

Kayak hirer Paul Pingiaro said the men “didn’t listen to what we told them” when hiring the kayaks. “We said to stay where we could see them and not go beyond the boat harbour or the end of the pier, but they went where they wanted and got into trouble.”

Proud of their role in the men’s rescue, Ms Archbold said the lifesavers were content to do what they were trained to do. “And how rewarding is that?”