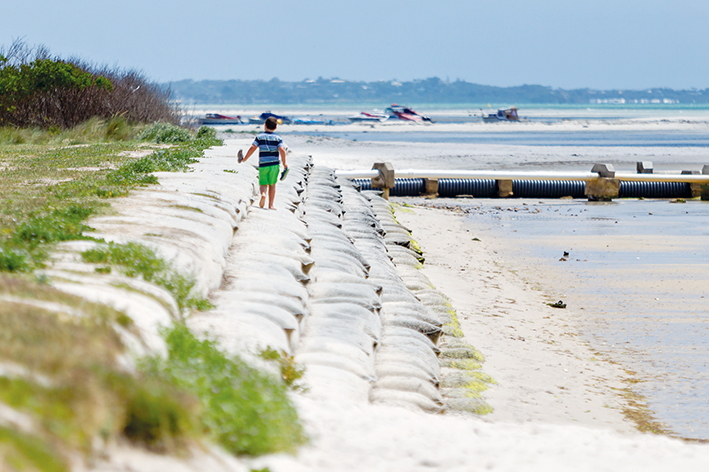 IT’S four and a half years since hundreds of sandbags were placed on Rosebud beach next to the jetty to protect the eroding foreshore as well as sand brought in to replace the eroded beach.

The damage was done in April 2009 when storms and high tides blasted the beach as well as others around Port Phillip.

The project – carried out by contractors for the Department of Sustainability and Environment (now called Department of Environment and Primary Industries, DEPI, but perhaps set to be changed again by the new Labor government) – cost $250,000 and the government claimed it would create a beach 160 metres long by 10 metres wide.

The renourished beach is long gone but the sandbags remain in place, designed by a Melbourne company to last at least 15 years.

The vandal-proof seawall consists of six levels, three below low tide and three above.

Revegetation of native plants in and around the sandbags was supposed to occur naturally.

Now Mornington Peninsula Shire wants to spend $2.25 million on the Jetty Rd foreshore precinct including a boardwalk on top of the sandbags and adjacent stormwater outlets.

It will be like putting lipstick on a pig as many residents and visitors think the sandbags are ugly.

Other works will include a new play area, “public plaza and waterfront deck”, promenade, paths, fitness stations, sprint track, “event servicing place” and a “timber groyne along the pier to protect the beach”.

The shire showed off its plans last month and is now considering public submissions.

Foreshore “protector” Jenny Warfe, who lead opposition to the Port of Melbourne’s Channel Deepening Project of 2008-09, says the Jetty Road Foreshore Recreation Node Master Plan is “another giant waste of ratepayers’ money being thrown at the foreshore doing hard infrastructure in area where, to get lasting solutions, nature needs to be restored”.

“The sandbags and beach renourishment was supposed to last for 10 years, according to Mike Benke of DSE,” she said. “Now, the latest expert solution is from consultants Aspect Studios brimming with brilliant ideas for the shire.”

Ms Warfe said “the reason there is no beach in this area is because the natural beach is buried under 55,000 cubic metres of fill dumped there in the 1970s from the freeway and trunk sewer construction”.

“The foreshore has since acquired a bitumen bike path and some stunted weed grasses, but no significant vegetation and still no beach after 40 years of waiting.”