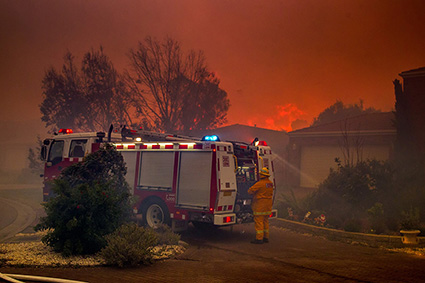 MORNINGTON Peninsula residents and visitors have been warned to be ready with bushfire survival plans.

The warning from the mayor Cr Bev Colomb followed a 120 hectare blaze at Hastings that razed much of Warringine Park after a desperate battle by fire fighters to save houses.

Cr Colomb said residents and visitors should “remain aware of the importance of acting on the fire danger ratings and having a bushfire survival plan”.

Hastings had “dodged a bullet” despite the Saturday 3 January fire which swept through the bushland reserve, the chair of the shire’s municipal emergency management planning committee, Cr David Garnock, said.

The damage – and the heartache – could have been so much worse, he said.

This view was shared by Hastings lawyer David Gibbs, group officer in charge of the local CFA brigades, who said that if the fire had jumped the Stony Pt/Woolleys roads intersection it had the potential to cause “massive destruction”.

“We could have lost hundreds of homes,” he said.

Luckily, no houses were lost or residents injured in the fires which began near railway tracks in Reid Pde about 2pm fanned by strong winds and temperatures in the high 30s. Piles of wood in a nearby timber yard provided an early source of fuel.

About 300 firefighters fought the blaze which sent embers flying over Reid Pde into paperbark forests grasslands at Warringine Park, jumping six houses on Seaglades Lane. A major wind change to the southwest at 6.30pm pushed the fire back towards Reid Pde and Warranqite Cres.

Cr Garnock said the fortuitous wind change – which forced the fire back onto itself – had prevented what could have been a disaster for residents.

“The fires were a wake-up call for us,” he said.

A cool change later on the day of total fire ban brought rain and a 10 degree drop in the temperature, helping firefighters control the blaze by about 8pm.

A community fire meeting at the Graham Myers Reserve, Bittern, on Saturday night – attended by 300 people – erupted into applause when CFA acting operations manager Neil Schlipalius said that while three houses had suffered external damage, none had been lost.

Mr Schlipalius said the present danger for Bittern, Crib Point and Hastings residents had past. He said crews would stay overnight to ensure embers were extinguished.

“The CFA had been worried that the fire may have jumped Woolleys Rd and got into the equestrian centre and the refinery land Crib Point would have been in trouble,” Cr Garnock said.

“The CFA was magnificent and the water bombing helicopters and the appliances saved the houses from the fires and ember attack. Several back fences were burnt and the fires came close to several houses but, luckily, none were lost.”

He said shire workers had recently mown a fire break between Warringine Park and neighbouring houses.

Cr Colomb later issued a news release thanking emergency services workers for their fire-fighting efforts. “It was pleasing to see the swift, successful and integrated approach of all services involved during the incident and the community coming together during this difficult time,” she said.

“I urge all residents across the peninsula, and our visitors, to remain aware of the importance of acting on the fire danger ratings and having a bushfire survival plan.”

As a result of the fire the shire opened an emergency relief centre at the Graham Myers Recreation Reserve, Bittern.

“The council acknowledges the Red Cross, Victorian Council of Churches, Ambulance Victoria and shire officers who all did a fantastic job in hosting the relief centre and providing assistance to the community affected by the fire,” Cr Colomb said.

The Warringine Park boardwalk was damaged during the fire and is now closed.

CFA state duty officer Peter Lucas said firefighters battled through a “horror night” on the Friday. Premier Daniel Andrews praised emergency crews for their response to what has been a “very, very difficult couple of days”.

Mornington Peninsula police inspector Karen Nyholm said police ran fire patrols in the lead up to, and on the day, of the fires due to the risks presented by the forecast conditions.

“Victoria Police have prepared operations and enact these at various times over summer to move into a prevention area, rather than just response,” she said.

“On this day, we were adequately resourced to respond and assist the CFA and this was fortunate as all hands were needed on deck.

“The CFA are the experts and the control agency when it comes to fires and we support and coordinate to provide the emergency response.”