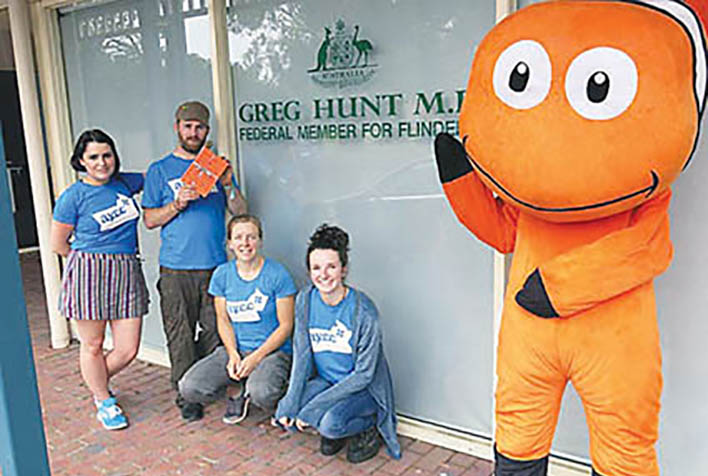 FLINDERS MP Greg Hunt says the federal government is “determined to protect and manage the Great Barrier Reef not just for the coming decades, but for the coming centuries”.

Since its election in late 2013 the government has “put an end to the five massive dredge disposal plans for the Great Barrier Reef Marine Park that were inherited” from the former Labor government”, Mr Hunt, who is also the environment minister, said.

“The Coalition is ending the century-old practice of dumping in the marine park – a practice that was fully embraced by Labor governments at both a federal and state level. I am enshrining this ban in law. This is the first time that any federal Minister has ever done this.”

Mr Hunt’s remarks followed a visit to Hastings last week by members of the Australian Youth Climate Coalition to protest at plans for material dredged for the expansion of the Abbot Point coal port in Queensland to be dumped near environmentally sensitive wetlands.

With their efforts to gain support from Hastings shoppers dampened by rain coalition members gathered for photographs outside Mr Hunt’s office.

Mr Hunt said environment groups had called for onshore disposal at Abbot Point, “which is precisely what we are looking at”.

Youth coalition spokesperson Erica Ransley said their protest was primarily aimed at limiting the amount of coal mined in the Galilee Basin because once it was burnt “it’s game over for action on climate change”.

“Millions of Australians have spoken out against this project – including many voters in Hunt’s own electorate – who perhaps remember that Minister Hunt campaigned to stop the dredging of Port Phillip Bay in 2007. Why wouldn’t he afford the same protection to our national icon, the Great Barrier Reef?

“The buck stops with Minister Hunt – he has the power to do the right thing for our climate and the reef.”

Ms Ransley said a recent study had shown that 90 per cent of Australian coal “must stay in the ground if we want to have a 50 per cent chance of staying below two degrees of global warming”.

The environmental activist group GetUp is backing legal action lodged by the NSW Environmental Defenders Office on behalf of the Mackay Conservation Group to stop Mr Hunt assessing plans to dredge and dump the spoil near Abbot Point.

Mr Hunt has countered by accusing GetUp of “ignoring the truth” and demanding it “explain” its actions.

GetUp has also used social media to rebut Mr Hunt’s claims, including his assertion that the group had “remained overwhelmingly silent as Labor advanced plans for dumping in the marine park as part of the Abbot Point project with 33 preliminary approvals”.

GetUp said it had launched its campaign to save the Great Barrier Reef in 2011, targeting the then federal Labor government “and has kept up the pressure to save the natural wonder ever since. Our campaigning included GetUp’s then biggest ever petition”.

“Our movement followed the Reef Fighting Fund with an incredible year of action, so much so that the government abandoned its plans to dump dredge-spoil at sea and found an alternative,” GetUp stated in a news release.

“Unfortunately, the new plans are terrible. The Queensland government’s own report shows it is the worst possible environmental solution at Abbot Point. (And incidentally, the cheapest).”

The case lodged by the NSW Environmental Defenders Office argues that the emissions from burning the estimated 60 million tonnes a year of coal to be exported from Adani’s Carmichael mine in the Galilee Basin “are big enough to have an impact on global warming and therefore on the Great Barrier Reef”.
“We will argue that the minister failed to consider the greenhouse gas emissions arising from the burning of coal mined from the project and the impact of those emissions on nationally protected matters, such as the Great Barrier Reef,” the defenders office said.

“They allocated the tenements and proposed a 38 million cubic metre dredge plan. It is not a federal government plan it is a state ALP plan and private proposal.”