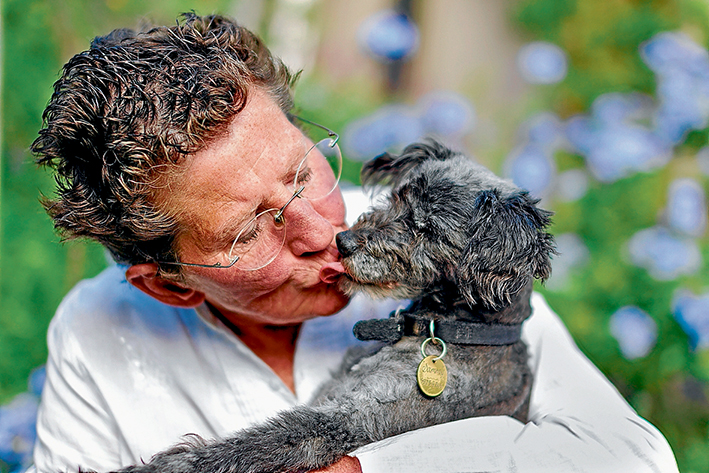 A LITTLE black dog spotted floating face down off Fisherman’s beach was all but gone until some quick thinking brought him back to life.

Sammy, the Maltese-poodle cross, was enjoying a walk and a paddle near the boat ramp with owner Maggie Brown on Tuesday when, to her horror, she looked up to see him about eight metres off-shore – and motionless in the water.

“I thought: “’Oh my god’, and I was trying to run through the water to reach him and hoping he would pop his little head up but he appeared drowned,” she said.

“I grabbed him and rushed him ashore and began slapping and squeezing his chest and poking my fingers in his mouth for a good seven to 10 minutes but there was very little response. I thought he may have had a heart attack or swallowed his tongue.”

The adopted Sammy is more than 10 years old – he was found wandering aimlessly about the peninsula 12 months ago – and almost deaf and blind. Mrs Brown gave him a home – and lots of love – but can only guess at the trauma he has been through.

Responding to the resuscitation, the dog began to vomit, sucking in air and dribbling salt water from his mouth. The more Mrs Brown squeezed his chest the more water came out until “he gave a huge shake and a shiver” and rejoined the land of the living.

“I wrapped him up in towels and flew home and gave him a syringe of milk to ease the acidic taste of salt water and he licked it up. Then I put him out in the sun to keep warm.”

Sammy was “looking good, although a little wobbly” an hour later, and appeared none the worse for wear while he ate his dinner.

Mrs Brown, a former nurse, said she enjoyed the nickname ‘The Dog Whisperer’ and always felt an affinity with animals. “I was hoping we weren’t going to lose him after all the tough times he’s been through,” she said.

“I was so relieved when he started to vomit because he was sucking in air. I knew we had him back then.”