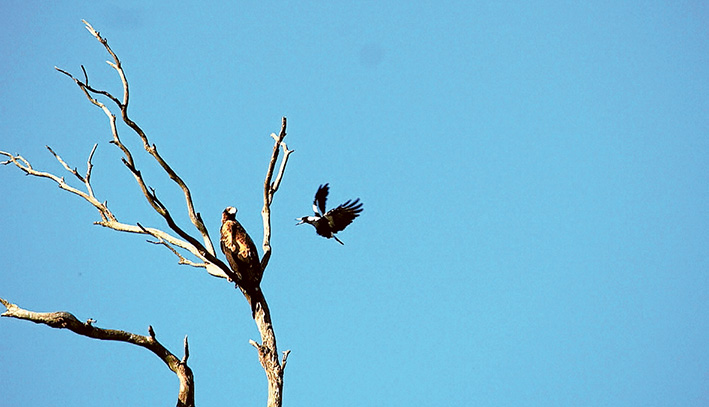 THE sound of screeching seagulls is nothing new over the shops at Mt Martha. The birds are masters of the air and making the trip across the road from beach to scavenging on the footpath is just a wingbeat away.

But on a Sunday afternoon in early January a glance upwards would have shown shoppers that the screeching of the gulls had nothing to do with squabbles over food.

Not too far above the shops glided a wedge-tailed eagle, its characteristic silhouette raising alarm among the birds underneath.

Sightings of Australia’s largest bird of prey are becoming more common on the Mornington Peninsula, although they may have always been unseen, hunting above paddocks now dissected by Peninsula Link (which also provides a larder of roadkill).

“Just as we drove onto the beginning of Peninsula Link on our way to Dromana today, I was amazed to see a young wedge-tailed eagle fly up from next to the road,” BirdLife Mornington Peninsula member Gillian Barnett has reported earlier this month.

“It swept in a semi-circle and alighted in a eucalypt nearby. Lucky I wasn’t the one driving so I could have a good look.

“I calculated we were inland from Seaford or, if anything, closer to town than that. Perhaps it is looking for a territory of its own?”

Another Birdlife member, Mike Carter, reported a pair of wedge-tailed eagles near the Eastern Treatment Plant, Braeside, on 25 January.

The birds are also a common sight from the leash-free area at Citation Oval, Mt Martha, as they ride the thermals above properties between Nepean Highway and the Moorooduc Highway.

Birdlife president Max Burrows said the eagles had large territories and had previously been known to nest at Main Ridge, Red Hill and Arthurs Seat.

“I have seen them fly over my place at Langwarrin,” he said. “I don’t think they have much competition on the peninsula, but they would be limited [in numbers] by the availability of prey.”

Sue Brabender, information ranger at The Briars Park, Mt Martha, said a pair of wedge-tailed eagles has a nest on private property near the The Briars.

“They have one large juvenile so we are still seeing all three or just two of them regularly across The Briars.

Ms Brabender said the trio had also been seen with a fourth “ring-in” and on a recent Friday morning she photographed an eagle being harassed by magpies as it sat in the top of a dead tree near the old quarry half way along the entry driveway to the visitors centre.

“Of course it was not concerned,” she said. “I have also watched them disappear across Nepean Highway and hope people’s small pets are safely concealed.”