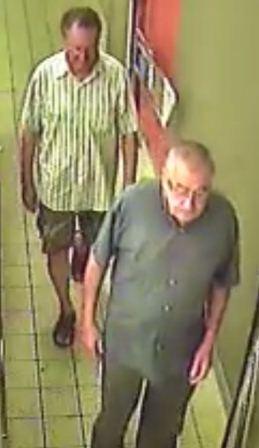 Frankston Sexual Offences and Child Abuse Team detectives are appealing for witnesses after a woman was sexually assaulted at a bayside shopping centre last month.

The incident happened in a lift at the Beach Street shopping centre on 8 February around 5.15pm.

The victim, a 42-year-old woman who is employed as a cleaner at the centre, was in the process of cleaning the lift when two men entered on level one.

One of the men struck up a short conversation with the woman while the second man grabbed the victim by her hand.

The victim tried to pull away from the man but was unable to do so.

The man touched the woman inappropriately and kissed her hand.

Both men got out of the lift at the underground car park and walked away.

Detectives investigating the incident have released an image and CCTV footage of the men they believe may be able to assist the investigation.

The men are described as being aged in their late 60s with one of the men wearing a grey shirt and long pants and the second man was wearing shorts.

Anyone with any information is urged to call Crime Stoppers on 1800 333 000 or submit a confidential crime report at www.crimestoppersvic.com.au