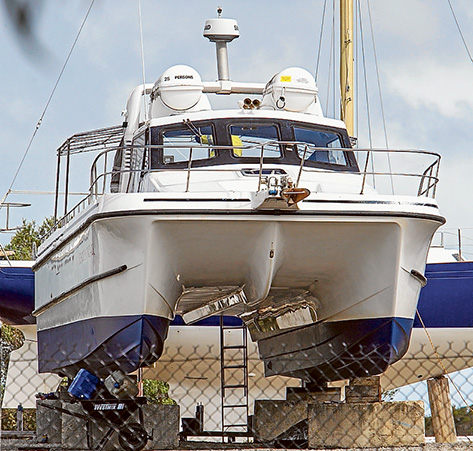 FRENCH Islanders have again been left stranded by the ferry.

Engine problems put both the main ferry, George Bass, and its back-up, Schouten Passage, out of action.

It is understood the Department of Transport issued a stop notice on the George Bass on Friday 27 February.

The ferry is reported to have been running on one motor and was docking on the outside of the Stony Point jetty because restricted maneuverability prevented it from using its normal landing inside of the jetty.

Without the regular ferry service schoolchildren were being brought from the island in small private boats.

Over the long weekend a boat owned by Westernport Fishing Charters was brought in to provide the ferry service, although it could not carry as many passengers as the regular ferry and on Saturday afternoon brought passengers back to Stony Point when weather prevented it from tying up at Cowes, Phillip Island. Passengers were also left at Stony Point because of limited space on the fishing charter boat.

A wedding planned to be held on French island was cancelled due to the lack of a ferry.

Some business owners on the island are considering adding up their losses due to the ferries not operating and making approaches through the Ombudsman for compensation.

The Schouten Passage was due to begin sea trials on Tuesday after undergoing repairs at Yaringa Boat Harbour, Somerville.

The whereabouts of the George Bass is unknown.

When contacted by The News yesterday (Tuesday) Inter Island Ferries’ operator Frank Denvir said he had “no explanation to give” as to why his ferries were not operating.

He said The News could “keep wondering” and should go back to whoever had contacted The News: “If they know so much, ask them.”

He said the ferry had sailed from Stony Point that morning in line with the timetable and that it “doesn’t matter what kind of boat” was being used.

Westernport Fishing Charters confirmed on Tuesday that its boat was operating to the timetable.

“Nothing’s happened to the ferry service,” Mr Denvir said. “I’m not required to use any particular type of vessel.”

Asked if passengers had been unable to disembark at Cowes on Saturday, Mr Denvir said docking decisions were made by a boat’s master “and if vessel can’t dock for whatever reason, that’s his decision”.

He said he did not “go into every failure or change of schedule by the master if he thinks it’s not safe [to dock]”.

Mr Denvir said he “wouldn’t know” when his ferries would return to service.

The latest disruptions to the ferry service follow several meetings in 2013 after French Islanders complained to the state government about ferry cancellations.

A public meeting in February 2014 arranged by Hastings MP Neale Burgess was assured by the then director of Public Transport Victoria, Norman Gray, that options were being considered to provide a reliable ferry service.

The options being explored included installing a floating wave break at Tankerton to provide more sheltered berthing; a fixed gangplank or a floating walkway to ensure safe loading and unloading of passengers at all tides; and several different ferry options, including stern-loading and rigid inflatable (RIB) type vessels.

At that time it seemed the Coalition state government was about to commit up to $3 million in upgrading the ferry service and the possibility of prosperity to the island.

However, none of the solutions have been followed through and some islanders doubt the promises of the former government may not be honoured by the new Labor government.