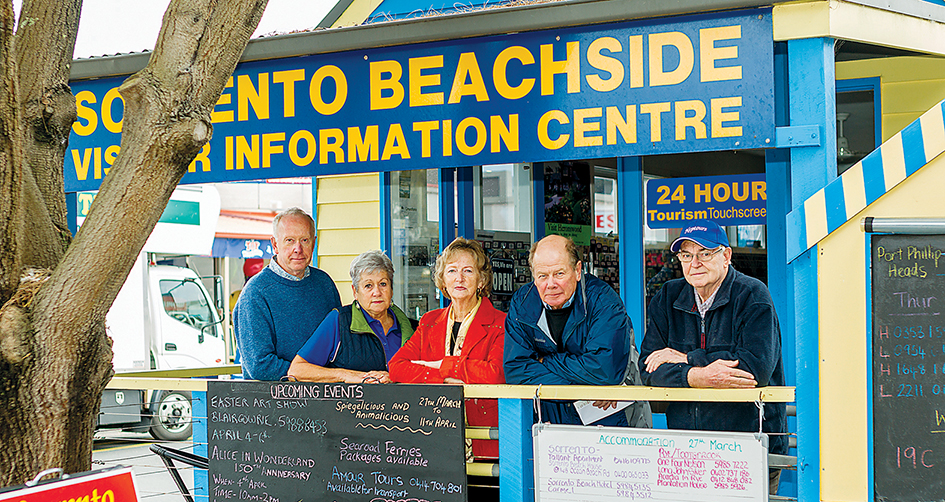 A PENINSULA tourism group and Mornington Peninsula Shire are at loggerheads over the future of the tourist information shop in Sorrento.

Members of Mornington Peninsula Beachside Tourism Association protested outside the shop in George St on Friday morning, expressing dissatisfaction with a possible shire move to close the shop and replace it with a kiosk.

The association’s volunteer secretary Norm Watson, who owns tourism bus company Nep Tours, said the shop was opened by then shire mayor Cr Tim Rodgers in 2006 and continued to be well patronised.

“During the peak tourism season, we have about 80 walk-ins every day during the week and more than 100 on Saturdays and Sundays,” he said. “That’s more than the shire’s main tourism office in Dromana.”

He said when association members saw the shire’s George St precinct plan they were stunned to see the shop had been downgraded to a kiosk.

“We had earlier been asked by the shire’s economic development manager Shane Murphy to provide new plans for the shop including toilets,” Mr Watson said.

He said a meeting two weeks ago with the shire’s director of sustainable environment Steve Chapple (who is handling economic development following the departure of Mr Murphy), Nepean Ward councillors Tim Rodgers and Hugh Fraser, and Tracey Cooper, executive chair of Mornington Peninsula Regional Tourism Board, had been unsatisfactory.

“Eighteen months ago the shire wanted us to move to the old Southern Peninsula Rescue Squad HQ in Sorrento Park, which is well off the beaten track; not a place for a tourism info centre. Two weeks ago we were offered a site next to Sorrento Museum, run by Nepean Historical Society, which is also well away from the action,” he said.

“It’s obvious that tourism information centres must be in the centre of towns to be effective.”

Cr Rodgers said the association had seemed pleased with the museum site offer. “The existing shop is in a car park and was only ever meant to be temporary,” he said. “The George St and Ocean Beach Rd intersection is an important part of the town, and the tourism shop is not up to standard.”

Cr Rodgers said the MP Regional Tourism Board was working on a study of the future of tourism shops that would be ready in May. “The report will assess the viability of the Dromana tourism info centre. It will cover the proposed tourism shop in the Peninsula Link freeway service centre at Baxter, and the trend for tourists to find information using smartphones and tablets,” he said.

“If the closure of the shop goes ahead there will be many disappointed volunteers who have given great service to tourism and promoted the peninsula. Many of them are retired and working at the shop provides them with a great deal of enjoyment and purpose.”