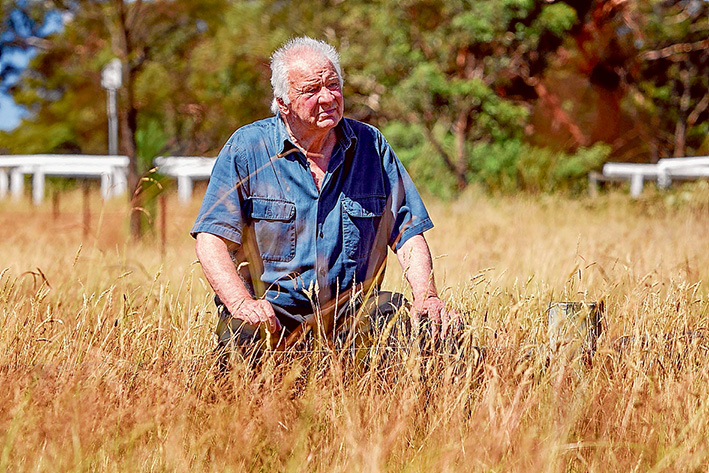 FRED Crump of Mornington put the shire council on the spot late last month when he asked about illegal dumping and other aspects of waste disposal.

Mr Crump, who seems to have his finger on the pulse and invariably comes up with good questions at council meetings, asked the shire: “Many months ago, members of the community attended two public forums to give feedback to the shire on best ways to deal with the peninsula’s waste … especially the … problem of illegal dumping.

“The shire said that a waste report was going to be sent to all participants. Still we have the ongoing problem of illegal dumping, bins still left on nature strips for days on end, and still no sign of any report. What’s the shire playing at?”

“It is an issue we have to deal with constantly and we do encourage community members to report it [illegal dumping] to the council,” she said.

“Officers are in the process of finalising a draft waste strategy for council’s consideration and that includes consideration of the very challenging issue of dumped rubbish.”

Ms Leighton said it was a criminal offence and residents could report incidents “via the shire’s website or our customer service number”.

“It is a significant problem for Mornington Peninsula Shire and also many other municipalities around Melbourne.”

Not said was that dumped rubbish incidents started to increase markedly when the state government sharply increased landfill levies in 2009, forcing councils to charge more for dumping, and when the shire cut “free” tip tickets from four to three in 2010, which generated more negative comments about the shire from residents than any other issue that year. In 2009, councils were paying a state government levy of $9 a tonne. Last year it was $53 a tonne.

Chuck it in the sea

Discussion of rubbish reminded The News of the bad old ways in the good old days, as covered in the Shire of Mornington’s centenary history, Mornington: In the Wake of Flinders by Leslie Moorhead, which was published in 1971. Ms Moorhead, who co-founded Mornington and District Historical Society in 1964 and was a long-time teacher at Mornington High School, wrote:

“At a public meeting held in 1902 to allow candidates for Council election to be quizzed on their policies, the burning question seemed to have been the location of the municipal rubbish tip, as reported by the Mornington Standard.

Asked by Francis Gillett if he approved of a rubbish tip in the centre of town, George Hepburn, who was seeking election, answered that he thought it “a great mistake to shift from the old site on the Esplanade” and went on to suggest that “they should blast away the rocks and construct a chute, down which the rubbish could be tipped into the sea, to be washed away”.

Curwel-Walker also was in favour of the Esplanade site. A candidate named Bridges stated that, in his opinion, the Lands Department would grant permission for Hepburn’s suggestion “if the ratepayers can show that by tipping into the water there would be no smell”.

A tip was established later on the site of the old brickworks at the corner of Gordon Street and the present Phillip Street. On completion of the filling, the area was levelled and recently [1960s] has been planted with grass to make a children’s playground.”

Fred Crump is no stranger to tips, rubbish and pollution. He was described as a “waterways warrior” by long-time southeast and peninsula region environmentalist Jim Kerin when The News spoke to him last week.

“Fred’s been lobbying local government and other public authorities for years, pushing them to clean up their patches,” Mr Kerin said. “He was almost single-handedly responsible for pushing Greater Dandenong Council to install centrifugal litter traps to stop rubbish entering creeks and Port Phillip.”

He said much less litter from Dandenong now entered Port Phillip. “Most of the litter that ends up on bayside and peninsula beaches comes from further up the line, especially municipalities abutting the lower Yarra River and Port Phillip such as Melbourne, Maribyrnong, Moreland, Darebin, Hobsons Bay, Yarra and Port Phillip,” he said.

Mr Crump has a dry sense of humour. Two of his recent questions created mirth in the public gallery.

“According to an article in the Leader on Tuesday 17 February 2015, Robin Cooper says the shire should take responsibility for poor roads. Why didn’t Mr Cooper take responsibility when he was transport minister [in the Kennett government] instead of blaming others?”

The question was answered by Alison Leighton, who responded that she would not speak for Robin Cooper, but perhaps she would have a chat with Mr Crump after the meeting about his views.

“Last week the Rotary clock in Mornington was losing one hour. This week it is gaining one hour. Why not hand it over to an antique dealer, get a new clock and have done with it?”

Ms Leighton thanked Mr Crump for “bringing that to our attention. The issue will be raised with our infrastructure maintenance team and we will be looking at what we can do to replace the clock. [The mayor] Cr Bev Colomb requested that we bring Rotary to the table so we can have a good discussion about that”.