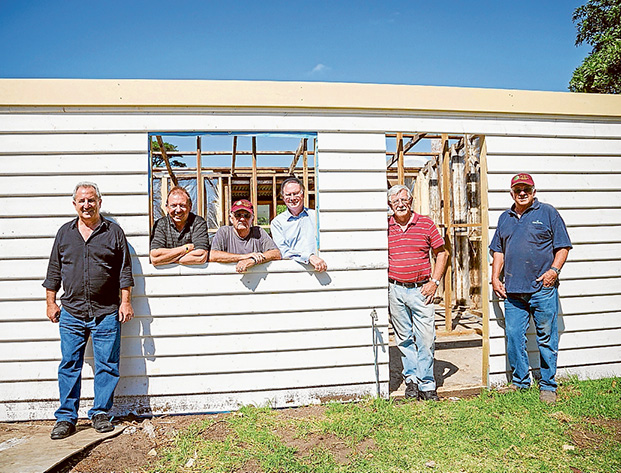 TWO outbuildings at Portsea’s Police Point Park are being restored as part of the shire’s heritage conservation works. The work is being done by Woodworkers of the Southern Peninsula, a not-for-profit club in Boneo Rd, Boneo.

Police Point Shire Park was created in 2004 when the federal government gave the shire 17.5 hectares at the entrance of Point Nepean. The park was the original boundary and entry to the Quarantine Station, and later used by the Department of Defence.

Of the six cottages, four will be used as respite accommodation for carers and their families, and two for a range of arts and culture purposes.

Built in 1916-1921, the respite cottages and outbuildings housed police for the Quarantine Station, and later the Army from 1950-1998, then for Parks Victoria rangers prior to its hand-over to the shire.

Since adopting the Police Point Recreation and Conservation Action Plan in 2012, the shire and community groups have been working to build on it as a place for the whole community, where people can learn from the past, enjoy the present and share into the future.

Woodworkers of the Southern Peninsula are restoring a shed and old laundry to be used for storage and again as a laundry.

Cr Tim Rodgers said the woodworkers’ dedication and workmanship was top class. “They have brought their incredible skills to the project – and it’s wonderful to work in partnership with them and to have our community get involved in this great project.

“Restoration work is really coming along, and we look forward to seeing these buildings restored and once again made useful for our community.”

Cr Hugh Fraser said the restoration work was an exciting part of the broader plan to reinvigorate the community park. “Two historic cottages are being trialled for use as respite accommodation for carers of those with a disability and their families,” he said.

Other works at the site include undergrounding overhead power lines, connecting cottages to services, replacing perimeter fences, removing old sheds and weeds, upgrading Franklands Drive, repairing and painting cottages, planning for a picnic and play area, planning new sections of the old ‘Calling Ground’ fence (a 13-metre divide where quarantine inmates could call across to visiting relatives), new signage, redeveloping one cottage and planning for arts and culture uses in other cottages.