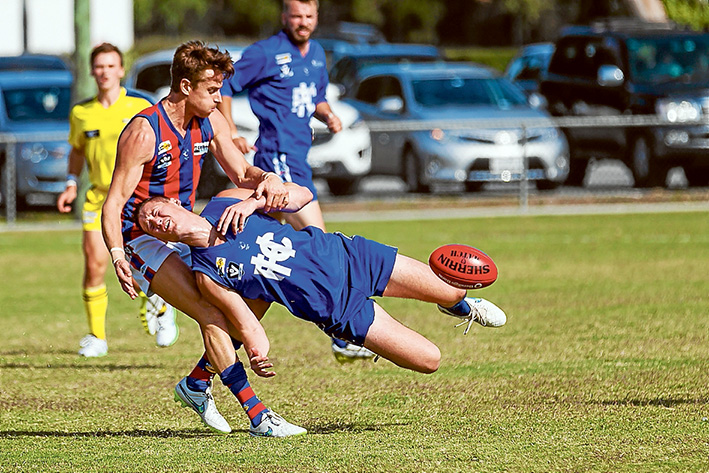 HASTINGS made a statement to the rest of the Nepean League competition on Saturday when it dominated all afternoon to beat glamour side Rye.

Whilst some at the Hastings FC were jumping up and down about the perceived lack of respect for the work done in the off-season at the club, coach Brendan Dunne was ‘more than happy’ with the low profile of the club leading into the first game.

Dunne was ecstatic after the match, pointing to a solid pre-season, greater commitment to team ethic and a will to succeed as the driving factors going into 2015.

“There has been a lot of hype about other clubs because some of them have picked-up a heap of recruits, however, I’d rather just worry about what we can control, go about our business and concentrate on getting the job done,” Dunne said.

And get the job done they did, the Blues dominating from the first bounce. They were harder at the contest, had a much better work ethic and a great desire for the hard ball.

It wasn’t only the recruits who stood up for the Blues, it was the obvious improvement from some of the existing players on the list.

Steve Charalambous had 28 disposals and kicked a goal, Dale Alanis was back to his elusive best with two goals, Steve Robb clearly has taken yet another leap in his career and was dominant with his forward pressure, Richie Vandenham was vintage, Taylor Stratton booted two and had 27 touches, Kain Stratton shut down Adrian Gileno after he got off the leash early, the underrated Lance Brouwer made it difficult for any tall in the Rye forward line and Daniel Noble was very good in the ruck and around the ground.

Brendan Dunne was back to his best, marshalling the troops, throwing his head over the footy, laying tackles and doing the one-percenters that have made him a champion player.

Of the recruits, Luke Clark was the pick of them with seven goals in a best-on-ground display. Shaun Foster just kept on presenting, Matthew Clifford racked-up possessions all over the ground, Daniel Dickinson added some flare and great kicking to the team and Scott Jansen, who has missed two years of footy with a knee, was dynamite.

Dunne, who debuted Jansen as a 16-year-old when he was coaching Karingal, was ecstatic for Jansen.

“He is a great kid with enormous ability and we saw a fair bit of that today,” Dunne said after the match.

“He has had rotten luck in his short career but his body is right, he’s really excited about playing footy again and he is going to be a very valuable member of this footy team.”

Rye was ordinary. It lacked appetite for the contest, many of its well-heralded recruits racked-up posessions but didn’t want to put their head over the footy and it lacked any bite in attack, outside of Gileno, who finished with four.

Ryan Mullet worked his way into the game after a slow start and was running on top of the ground by the end, Dean Millhouse was tireless down back and Steve Daniher, son of Terry, continually drove the team into attack.

Rhett Sutton was a lifeline in the second half, however, was forced to play back.

Simon Taylor was towelled-up in the ruck and if the Demons are to be successful, Taylor needs to do more around the ground and allow Sutton to stay forward more permanently.

The sooner the Demons can talk Ben Holmes to come back the better. They lack a target and shouldn’t be relying on Harrison Wilson, who is a star of the future, along with Brady Egan and Andrew Dean, who are already young guns, to shoulder the responsibility.

I hear talk of the club perhaps wanting coach Josh Moore to concentrate on coaching and forgetting about playing. A message to the Rye faithful, Moore is a ball magnet, running machine and has a thirst for the contest. He’s fit and you need him in the middle getting the footy out!

With new coach Beau Muston holidaying overseas and unavailable, the Bombers booted two goals in the opening half.

Matt Baker was superb in attack for the Buds with three goals while Jack Jarman and Ryan Spooner dominated.

Tyler Blake and Jordan Walker were the best of the Bombers.

Pearcedale’s shocking pre-season translated into a train wreck of a round one game against Devon Meadows.

Troy Aust booted four for the winners while a further nine players contributed on the scoreboard.

Pat Harmes was clearly the best player on the ground, dominating in the ruck and around the ground, while skipper Steve McInnes was superb.

Dwayne Bowes and Matt White were the best of the less than ordinary Dales.

Red Hill knocked over a depleted Crib Point as expected.

Magpies coach Duane Annable said before the game that five of his best 14 players were either underdone or not playing early in the season. It was always going to have an impact on the wide open spaces of Red Hill.

Michael Chaplin and Matty Vagg both kicked goals (three and two respectively) in the reserves and should make their way into the team in the coming weeks. Dylan Neal and Ryan Blake were also in the reserves.

Daniel Edwards and Lee Koerner were the best of the Pies, who still had the likes of Brad Davidson, Luke Herrington, John Ransom, Brad Arnold, Waide Symes and Dean Warry in the team.