Cricketers gear up for England trip 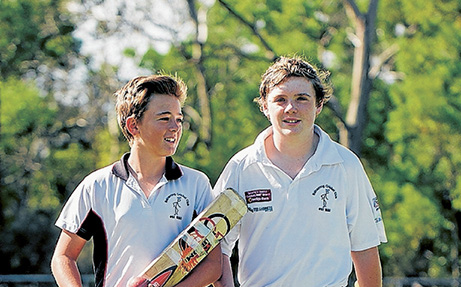 BALNARRING cricketers Lachlan Barton and Jackson Hannah are gearing up for the trip of a lifetime: they have been selected to play in the Mornington Peninsula Cricket Association under-15s touring England in June.

They are among 28 players in two squads nominated by clubs from all over the peninsula and chosen at an MPCA carnival in December.

The trip costs around $7800 each – an amount some of the players’ parents find difficult to afford. “We’ve had a garage sale to raise some money, and I’ve been putting away some more from my part-time job training the Hastings Football Club seniors,” his mum, Karen, a nurse, said last week.

Last week she had a brainwave: “I have taken out a small personal loan to pay the remainder of Lachlan’s cricket trip, and will be paying the final balance next week.”

Dad Dwayne has also helped with money from his part-time job with the Southern Umpires’ Association.

Lachlan has been selected as an opening batsman, and Jackson as wicketkeeper. The boys regularly open the batting at Balnarring club games.

Lachlan has represented the MPCA several times in the Victorian Metro Cricket Union state-wide competition, including this season. Jackson did the same in 2013.

He is in Year 9 at Dromana Secondary College where he is actively involved in the St John’s first aid program. He is also a member of the Bittern Junior Fire Brigade.

“Lachlan is a very level headed 14 year old, who is passionate about his cricket, but is also very aware of the needs of people in the community and has never let his sporting talent go to his head.”

Jackson’s mum Kerrie said her boy was “over the moon” with his selection. The 14 year old, in Year 9 at Balcombe Grammar, has played at Balnarring for seven years and recently won the club’s WP Myer’s Award for best junior player. He also plays tennis for Dromana – in the Section 1 team which won this season’s flag.

“It’s a long way to go to making the Australian cricket team but he is working on it,” Mrs Hannah said.

General manager Paul Pelzer said the MPCA had been sending two teams to England over the past eight years. “It is an educational experience for the boys who get to play a variety of clubs, see the sights and come back much better for the experience,” he said.

“It’s not a representative team; we pick the best sides we can from the players available. A lot of parents go, too, and many extend their trips to get the most out of it.”

He agreed the cost could be prohibitive for some families, and that the association did not provide funding, although it did provide gear and organising assistance.

He said boys were being sought to fill two vacancies on the trip.