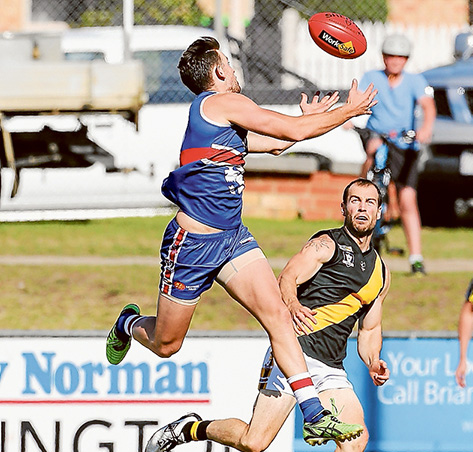 AN after the siren goal from Liam McKay saw Edithvale draw with Langwarrin in the second round of Peninsula Division Football.

For the first three quarters of the match, Langwarrin dominated general play and had the upper hand against the home side.

Ricky Johnson was continuing his outstanding form, doing the job on Jarrod Garth; Mark Meehan was being kept quiet by Nick Hammill; Matt Naughton was winning in the ruck, despite doing the bulk of it on his own, and Gerard Brown was completely dominating up forward.

Brown took at least 20 marks in a dominant display in attack, finishing the afternoon with a staggering 3.11.

Langwarrin had 31 scoring shots to Edithvale’s 26.

Kangaroos’ coach Gavin Artico said it would be unfair to push any blame on Brown for the draw.

“Boofa was sensational all day and clearly the best player on the ground,” Artico said.

“Of the 11 points he kicked, at least eight of those the goal umpire hardly moved. It wasn’t as if he was spraying them everywhere. They just missed.

“The reason we lost is because our structures and disciplines fell down. We watched them the week before, knew what to expect and executed it for the most part.

“Our players have to realise that while 60% of the game is about running, jumping, marking, handballing and kicking, the other 40% is about following team disciplines and being able to stick to them.

“For three quarters, we got it right most of the time. However, in the last quarter, we just didn’t do what we knew we needed to. At the very least, maintain what we had executed in the previous three quarters. We got sucked into contests instead of rolling back, we didn’t man up and allowed the opposition to get loose players out the back, we didn’t hold up the footy or have shots on goal from where we should have.

“That’s where the draw come from. With a couple of minutes left on the clock, we should have had a shot for goal from 40 metres. Instead, we looked for the short pass, kicked it to the man on the mark and they took it up the other end. Then, at a stoppage, they had three loose players back and we kicked it to them out of the stoppage. They threaded it through, took a mark, the siren went and they went back and kicked it.

“I think YCW, Mt Eliza and Mornington have proved that they are going to be hard to budge out of the top three. Bonbeach, Chelsea, Karingal and Seaford appear at this early stage that it might be a tough year. That leaves us, Pines and Edithvale to fight it out for fourth and fifth.

“The four points on Saturday after controlling things for three quarters would have been very handy,” Artico said.

Matt Clark and McKay were outstanding for the Eagles, while Brett O’Hanlon was pretty good also with a couple of goals.

Justin Van Unen made it 18 goals in two matches after booting 10 for Mt Eliza against Bonbeach on Saturday.

Dave Barton was at his best for the winners while Matt Davis and Tim Strickland were also solid.

The lack of injuries so far this year allows the guns Sam Gill, Darren Booth and Karl Lombardozzi to set things up from half back for the Redlegs, as opposed to playing on ball, which they were forced to do for long periods last season.

Nick Watersone and Sheldon Price were the best of the Sharks, while Gary Carpenter was back in the side and led from the front.

Frankston YCW booted 20 goals against Chelsea on Saturday on the way to a commanding 87-point victory.

The margin was only 10 points at half time, however, the home side booted 14 goals to three after the major interval.

Grant Trew, Todd Gardiner and Stuart Brooke were named among the best for the Gulls.

The Dogs extended their lead at every change with Warwick Miller dominating and Dale Nolan and Adam Symes getting a heap of it.

James Quanchi was the best of the Tigers, while Matt Herbert and Rourke Fischer were also fine contributors.

Aaron Edwards booted five goals and Dale Tedge three while a further nine players contributed on the scoreboard. Brendan Cowell and Beau Hendry were dominant in the victory.

Blake Simpson and James Paxton with two goals were the best of the Bulls, while Luke Van Raay was vintage.