Landmark trees get the chop 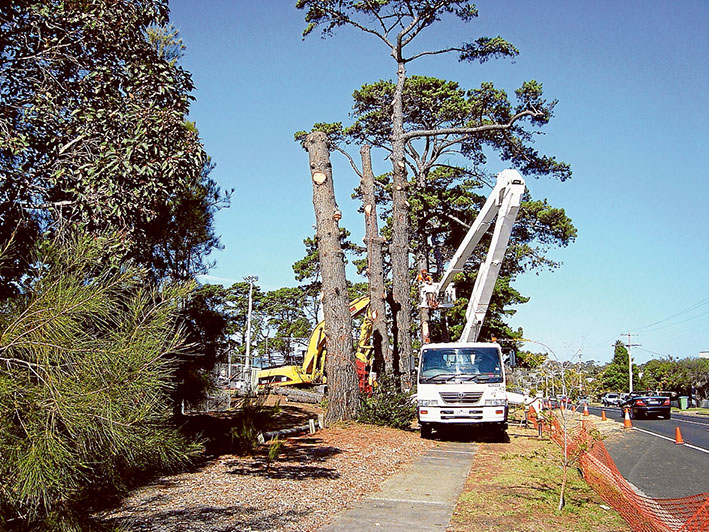 THEY’VE chopped down the trees of my childhood in Mornington.

Fifty old pine trees were removed from CB Wilson Reserve near the Fishies Beach end of Wilsons Rd a couple of weeks ago. They had to go – they were old and potentially dangerous, although it’s odd the shire council declared them a danger more than four years ago.

I used to live in Marine Ave with mum and dad in an old house on more than an acre, and our back fence was close to the park.

It was a tumbledown fence covered in tea-tree and shiny leaf with gaps in the palings and I’d slip out and into the park to hang with the three Klarenbeek boys. Lance and Colin Milne, who lived on Alexander Ave, and Tim and Steve Warner, who lived at historic Wolfdene on the corner of Wilsons and Nunns roads, and other neighbourhood kids would sometimes join us. “Make sure you’re home before dark,” our mothers would say.

We’d climb high into those pines and hide from adults. We’d dig pine nuts out of the cones. They were hard to crack but their exotic taste was our reward. We’d hang old tyres on ropes from high branches and pretend to be Tarzan. We’d hurl branches and pine cones at each other during battle. Our parents would have been horrified at the risks we took. But it was a different time – what parents nowadays would let their eight-year-old kid and his dog take off for most of the day and walk to Fossil Beach and back?

When we were bored climbing we’d go to the (unfenced) dam in the southwest corner of the park. The Klarenbeeks had a big log full of holes submerged in the dam. It was attached to ropes. Every now and then we’d heave it out of the water and grab yabbies as they scuttled down the bank. We thought we were Huck Finn – pine nuts, yabbies and certain types of edible grass were on our snack menu.

Other parts of the park were covered in smaller trees and scrub. We had hiding places and secret meetings. Next to the Klarenbeek home were two vacant bush blocks where we had underground tunnels and a treehouse. The tunnels were constructed using the cut and fill technique. We scavenged timber and corrugated iron to cover the trenches before shovelling dirt on top. One tunnel was about 30 metres long. It was scary in there with a guttering candle the only light source.

Childhood memories flooded back as I stood and watched giant machines dismember the pines, which took a week.

Their removal was proposed by the council in late 2010. Locals heard about it and created a petition with about 280 signatures objecting to their removal.

A report to councillors stated: “Residents are concerned that the trees have historical significance as they are the markers of the original subdivision boundaries, the trees facilitate the removal of pollution, and many large trees in the area have already been removed.”

The shire’s parks and roadsides contract coordinator Greg Powell said the pines were in poor condition and the shire proposed to replant with “suitable indigenous plants”. “The petition will be considered as an objection when the council processes its own planning application.”

Why did it take so long for the removal to occur? In 2010, Greg Powell said the pines were in poor condition.

Mr McDonagh: “The trees at this location continued to be monitored and maintained to prolong their life. However, at the time they presented an unacceptable risk to the users of the park [and] their removal was always planned. A planning permit was obtained in 2012 in preparation for the planned removal of the pine trees as part of the shire maintenance contracts. The permit included a requirement for re-landscaping of the site.”

Doesn’t explain the delay, does it? How much did removal cost?

“The project [was] part of the shire’s parks and roads maintenance contract. No capital cost to the community. The logs [have been] provided to a local mill for use in the manufacture of a range of products, for example, shipping pallets.”

Mr McDonagh stated mulch from the trees, which is in big piles along Alexander Ave, would be used during landscaping of the reserve. “A requirement of the planning permit is that … the site must be landscaped in order to restore habitat and amenity to the park. The landscaping will consist of a mixture of trees, shrubs and ground covers.”

Bet new kids on the block won’t be able to climb and hide in the new trees.