Traders told to get own CCTV 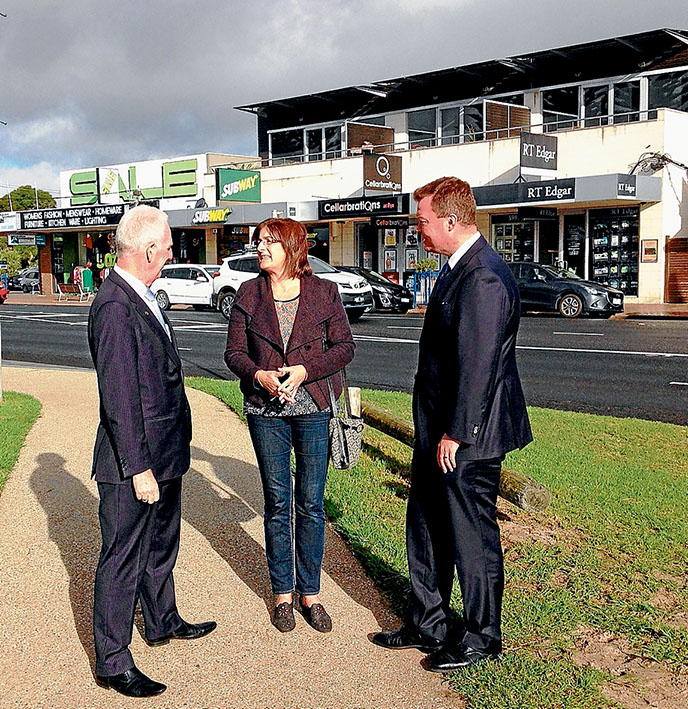 TRADERS in Rye are being encouraged by two shire councillors to install their own CCTV cameras after years of delay and unfulfilled promises by state governments and the shire.

Cr Rodgers said many Sorrento traders had installed CCTV, which had made the town’s main street safer, and “we hope Rye traders will follow suit as cameras are now much cheaper than before”.

“Rye traders have been asking for CCTV cameras for more than a decade. We can’t wait for governments any longer,” he said.

The call came a day before Nepean MP Martin Dixon and the state Opposition’s Shadow Minister for Community Safety, Edward O’Donohue, visited Rye with Caterina Politi, the mother of David Cassai, who died after a brawl between two groups of young men outside shops in Rye in December 2012.

Mr Dixon and Mr O’Donohue used the visit to call on the Labor government to fund CCTV cameras for Rye’s shopping precinct, something that was promised by the Coalition during the election campaign last year.

If it had won, the Coalition government would have given the shire council $250,000 for Rye cameras.

Mr Dixon said CCTV systems “are proven to deter criminal activity and are also an important resource for Victoria Police in solving crimes”.

He said the shire council had “already partnered with the former state government to successfully deliver CCTV for Hastings”.

This is correct but it took more than two and a half years as shire officers and power company United Energy wrangled over putting cameras on the town’s Main St power poles. Mr O’Donohue, then Minister for Crime Prevention, criticised the shire for failing to deliver CCTV projects in Hastings, Mt Eliza and Mt Martha. The nine Hastings cameras were switched on mid-2014.

Rye Beach Community Association asked for CCTV more than a decade ago after vandals went on a window smashing spree. Two years later, on New Year’s Eve 2006, more than 500 people were involved in a riot on the foreshore that saw police injured and multiple arrests. The shire shut down Rye for all future NYEs but still no CCTV.

In March 2013, more than 2000 people signed a petition calling on the shire to install CCTV in Rye. “There has been ongoing violence and vandalism in this area for many years and with the ever-increasing numbers of visitors to the Mornington Peninsula, the problem will only get worse and monitored CCTV systems have proven to be a great deterrent for bad behaviour all around the world,” the petitioners stated.

The shire’s manager of community safety, Claire Smith, told councillors that council officers would “provide a report to the council for their consideration detailing the logistical consideration and the benefits and costs of a CCTV system in the Rye township”.

“This will also provide some public area coverage to promote community resilience and shared community responsibility to assist police with crime,” he said.

Business association president Peter Houghton said “we have investigated the shops where CCTV can be installed and we have the technology and facilities for its installation”.

The News understands several Rye traders already have CCTV, including one whose camera captured the December 2012 brawl, which lead to the arrest of David Cassai’s killer.