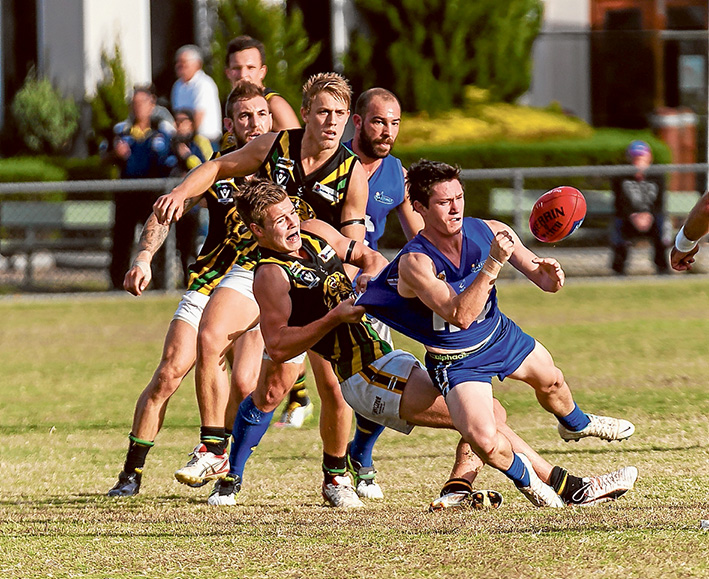 RED Hill have now knocked over the two grand final sides of last season after beating Sorrento on Saturday in Nepean Division.

The Hillmen now sit in fourth position on the ladder as one of four teams who have won three matches this season.

Hastings is the only undefeated team in the competition. It has won all three of its games.

At half time the Hillmen trailed by two points, however, booted four goals to two in the third quarter to open up a 14 point break.

The Hillmen peppered the goals in the final quarter too but inaccuracy (2.5 to 2.3) cost them an even more convincing win.

The Sharks went into the game without coach Troy Schwarze, who is overseas for three weeks.

Paul Wintle and Michael Mock were outstanding for the Hillmen while Seamus Thomson continued his outstanding season.

Myles Pitt, who is due to go overseas soon, booted three goals for the Sharks and worked tirelessly, while Jon Croad and Tyrren Head were also up and about.

Crib Point went into their match against Tyabb on Saturday without their coach. Duane Annable was at his sister’s wedding.

This meant that skipper Brad Arnold took the reigns. He would have been happy with the Pies’ four-quarter performance, booting 17.21 (123) to beat Tyabb 5.2 (32).

Luke Herrington was the key contributor in front of goals for the Pies with four goals while Matt Sloper, usually known for his defensive work, found himself forward and finished with three goals.

Matthew Wappett was also a handful for the Yabbies with three goals while Jon Flack booted two in his first game for the season.

Annable told the RPP Footy Show on Saturday morning that if his side could be “thereabouts” at the halfway mark of the season, he was confident that they could make a run for the finals.

“It is tough in a 16 round season to make a late run but I think given our poor pre-season with injuries to key players, they will be up and about in the second half of the season.

“I’d like to think that our best is still good enough to match it with the best in the competition,” said Annable.

Rye was made to work hard right to the final siren to shake off a persistent Frankston Bombers.

The Demons trailed at quarter time but hit back with a five goal second quarter to lead by eight points at the main break.

Andrew Dean booted four goals for the winners and Kris Bardon and Dean Millhouse booted a couple each.

Ryan Mullet was dominant for the Demons, while Adam Kirkwood and Nathan Henley also got plenty of the footy.

The Demons went into the game without ruckmen Simon Taylor and Rhett Sutton.

Rye coach Josh Moore’s three-quarter time speech got the hairs on the back of the neck standing on end.

It worked, they dominant the final 30 minutes of the match.

Devon Meadows’ coach Glenn Michie was left wondering what could have been after their 46 point thrashing at the hands of Rosebud.

After winning in round one and pushing Sorrento to the line two weeks ago, Michie had five players unavailable due to two of them going to a music festival, two overseas on holiday and one player at a wedding.

Regardless of that however, the side that ran out for the Panthers was more than capable of kicking at least one goal in the first half.

Phillip Raso, Gavin Kerr and Steve McInnes were the best for the Panthers while Rob Forrest and Chris Dew dominated for Rosebud.

Former Frankston Dolphins’ skipper Paul Kennedy also made his debut for the Buds on Saturday.

Luke Hewitt and Steve Robb starred for the Blues, along with Taylor Stratton, while Dan and Sam Guerts were very good for the Tigers. Sam Fowler also booted another four goals for Dromana.