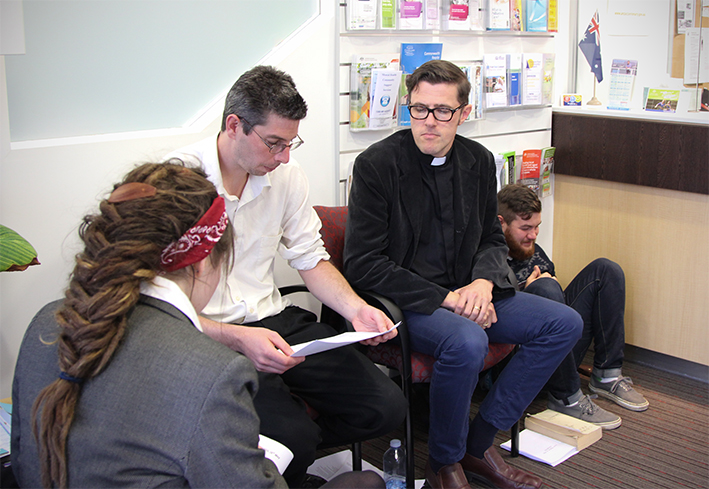 CHRISTIAN leaders have occupied the Hastings office of Flinders Liberal MP Greg Hunt and are refusing to leave until the Federal Environment Minister gives a commitment “to release all children” from the Nauru and Manus Island detention centres.

A Christian coalition of Uniting Church, Baptist Church, Church of Christ and Peninsula City Church members grouped under the Love Makes A Way banner turned up unannounced at Mr Hunt’s electorate office at 11am this morning to protest against the federal government’s asylum seekers policies.

Love Makes A Way describes itself as “a movement of Christians seeking an end to Australia’s inhumane asylum seeker policies through prayer and nonviolent love in action”.

Group members were detained in May last year after staging a sit-in prayer meeting and vigil at Prime Minister Tony Abbott’s office in Sydney.

A similar protest by a group of Christian priests and nuns was held at Labor opposition leader Bill Shorten’s office at the same time as the sit-in at Mr Abbott’s electorate office.

Police arrived at Mr Hunt’s office at about midday today.

“We have a commitment to non-violent protest  … but stand on behalf of the issue at the same time and the people who can’t have a voice for themselves.”

He said the six inside the office building are praying and holding a vigil “for all of us” including the children and families held in offshore detention.

“They [the six] are not blockading or stopping people from coming in and out of the office but the staff said that they find it a disruption to their work day.”

The six are refusing to leave until “Greg Hunt will approach the Prime Minister and Cabinet in order to seek a moratorium on the transfer of asylum seekers, especially children, to Nauru and Manus Island” according to the group’s media statement.

A spokeswoman for Mr Hunt said the Environment Minister is in meetings in Melbourne today but he had called to speak to a Love Makes A Way representative at the scene.

She confirmed office staff had called police when the protesters refused to leave because they are “trespassing”.

Police officers remain at the scene.