Barber stays at the cutting edge 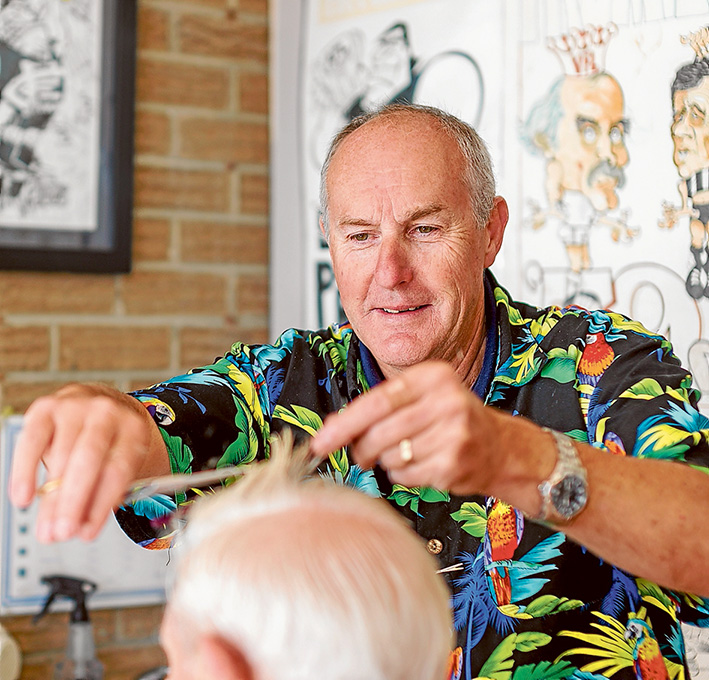 RYE barber Jeff Glaum didn’t plan on staying “too long” when he bought the Pt Nepean Rd hairdressing business in 1980, but last week was celebrating his 35th year of wielding the scissors and clippers.

The 55-year-old, left, who was born at the old Dromana hospital and attended Rosebud Primary School and Dromana Tech, even did his apprenticeship at the same shop before taking over.

“I’ve enjoyed it, yes,” he said last week. “At the time I thought maybe I would stay four or five years and then do something else. But the time just went by and I have no idea where it went.”

With no plans for retirement he says he will “be here a while yet.”

“I was looking at the grandson and thinking: ‘I remember when you were about 10’.”

Mr Glaum has served thousands of customers over the years, and says he is noticing a much younger demographic now.

And that’s led to a revised barber customer relationship: “Years ago the kids would get what mum and dad told them, but now they tell me what they want.”

The youngsters wear wax and jell in their locks, whereas years ago it was combed and much neater. “As soon as it’s cut and neat and tidy they tell me to mess it up,” he said. “And many are even asking for Brylcreem.”

Surrounded by four very familiar walls, Mr Glaum has had the same landlord for 34 years and was without a lease for the first 28 years. “We just had a handshake then.”

The biggest change in the shopping centre, he says, is the rising number of cafes. “They’re everywhere.”

As a surprise, wife Leanne and daughter Kirsty, also a hairdresser, decorated the shop with balloons, streamers and a few drinks to celebrate Friday’s milestone. “We had a few drinks and a lot of regulars dropped in – many who have been coming in for the whole 35 years and are retired.

“One customer thought it was to celebrate [Collingwood coach] Mick Malthouse’s 715 game milestone. But I put him straight.”