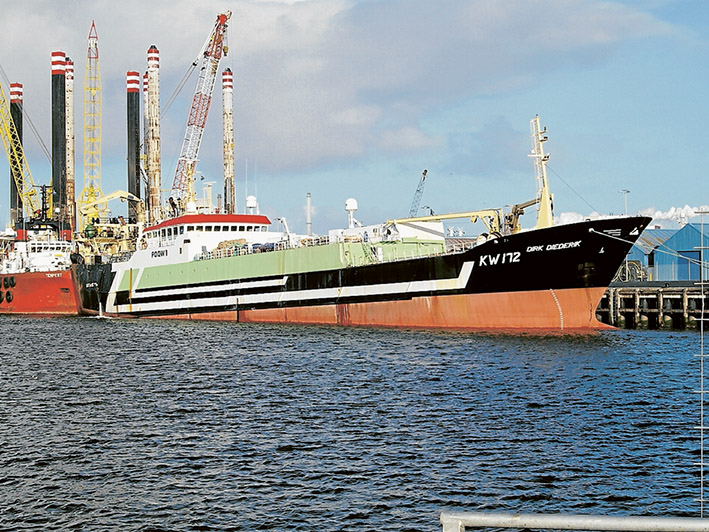 Warning: The Geelong Star, shown above in its former livery when named the Dirk Dirk, has been warned that its fishing activities will be further limited unless they are undertaken without more deaths to seals and dolphins. Picture: Andrew Mackinnon
Share
Facebook Twitter LinkedIn Pinterest Email

NEW restrictions have been imposed on the fishing industry following the deaths of eight dolphins and four fur seals during two offshore trips by the factory trawler, Geelong Star.

The Australian Fisheries Management Authority (AFMA) says trawlers in the small pelagic fishery must now only fish during daylight while the Geelong Star has to prove if has taken “all reasonable steps … to minimise further marine mammal mortalities”.

Boats operating within a defined management zone would face a six-month ban on fishing if a dolphin died as a result of their operations.

The tightening of fishing rules is seen as a “significant win for marine mammals in Australian waters”, by Jeff Weir, executive director of the Hastings-based Dolphin Research Institute.

“Our goal should be to eliminate marine mammal deaths as bycatch, most critically because we don’t know enough about the vulnerability of dolphin communities around our coast, so much more research is required,” he said.

“We have said all along that the vessel management plan was a live document and we would be adaptive and responsive to ensure that all reasonable measures are in place to minimise harm to marine mammals.”

Mr Findlay said the Geelong Star must be fitted with tamper proof cameras to monitor its fishing activity before setting sail for its third voyage.

“In addition to e-monitoring, two AFMA officers will remain on board to closely observe the vessel’s operations,” he said.

While encouraging the vessles operato, Seafish Tasmania, to work with marine mammal experts to ensure it stays “within the restrictive fishing conditions”, Mr Findlay said “all fishing poses risks that can sometimes lead to the unintentional harm to marine mammals”.

Mr Weir said the AFMA’s night fishing ban and threat to close the entire fishery if any dolphins die in future operations “is a strong evidence-based response”.

“Some important research in this area has been funded by the federal government and these recent deaths confirm that this funding should be ongoing,” Mr Weir said.

“Where there are gaps in our knowledge we need to undertake more research and use the precautionary principle to ensure the long-term protection of marine mammals in Australian waters.”