Kangas upset Stonecats in come from behind win 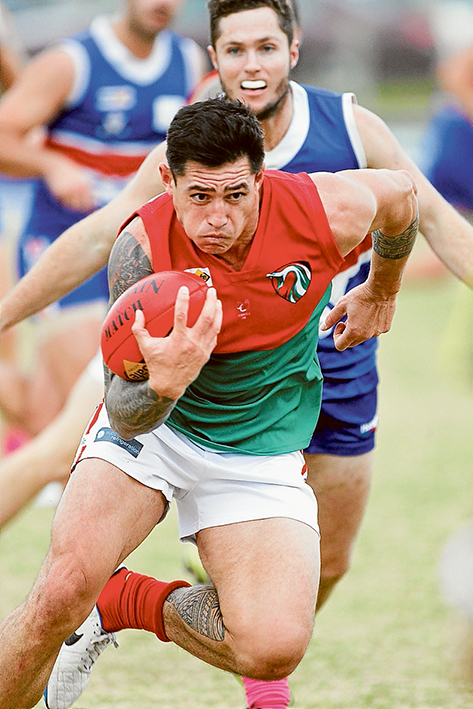 LANGWARRIN dislodged Frankston YCW from the Peninsula Division top five with a come from behind five-point win on Saturday.

The Kangaroos trailed by 20 points at three quarter and went further down when YCW kicked the opening goal of the final quarter. However, the tenacious Kangas kicked the final five goals of the game to record a 12.8 (80) to 10.15 (75) victory. Frankston YCW went into the game without Scott McLeod, Ricky Morris, Ben Tellis, Luke Collins, Ash Eames and Anthony Barry. Despite the missing key players  Gavin Artico said the four points was all that counted.

“Obviously, we were all aware of the quality of players they had missing,” Artico said. “Unfortunately, us winning the game was always going to be due to ‘YCW missing players’. It (the result) was always going to be more about YCW and less about us. Fact of the matter is, in my opinion, we proved that we have greater depth, adapted better and were full of running in the end. We ran all over them.

“We are missing Dylan Luxa, Andrew Withers, Hayden Golby, Dale Eames and our 2014 B&F winner, Liam Hogan. You could argue that they are not as big a names as the players YCW was missing but for us, they are equally as valuable. They are all well and truly in our best side.

“By quarter time on Saturday, we lost Jayden Grose and Nick Hammill. Grose had back spasms, so we were down a midfield rotation, while Hammill courageously put his body on the line and got knocked out. So this robbed us of a key position player. Again, we had to adapt and our players had to step up to the plate.

“I was really proud of the way they turned things around. We came at them hard and whilst they tried to defend, we attacked and continued to try and score.We could have rolled over but that’s not our style. It was a good confidence builder for the group and again highlights that if we play the way we want to and stick to that, then the results would come,” Artico said.

Matty Dinkos booted five goals for the Kangas while Gerard Brown continued his domination with four majors. Matty Naughton rucked for most of the game and was outstanding. Shane Paterson was again dominant. “Patto is really relishing his onfield leadership role and being part of the midfield group. He’s missed a lot of footy and it was always going to take time. He was never going to forget how to find the footy and be courageous, which are his strengths. It was the touch he needed and it’s well and truly back,” Artico said. Anthony Bruhn booted three goals for the Stonecats while Kevin Lylak was amongst the best in his return game.

Pines came back to earth with a massive thud after being touched up by Mornington at Alexandra Park. Missing skipper Jamie Messina with a season-ending knee injury, the Pythons were always going to struggle at Mornington, despite their four wins to open the season. Guy Hendry was the side’s most productive forward with three while Corey Ash was named his side’s best. The day belonged to the Doggies and they provided just how much ground Pines needs to make-up to be competitive against the best in the competition. Jimmy Cameron was unstoppable around the footy while the likes of Joel Miller and Adam Symes continued their dominant starts to the season. Ryan O’Dell also found a heap of the footy and Michael Gay, despite not being 100 per cent fit, dominated the ruck. The Dogs were in control for the duration and won 14.14 (99) to 6.13 (49).

Former St Kilda star Stephen Milne had little impact on Chelsea as they went down to Bonbeach by 31 points. Whilst he kicked a goal, Milne was unable to stop Bonbeach’s onslaught, going down 12.9 (81) to 6.14 (50). Chris Bryan booted four for the winners while Justin Bennett and Mark Tyrell booted a couple each. Anthony Carrio got a heap of the footy, as did Matt Douglas and skipper Gary Carpenter for the Sharks. Hudson Thomas and Grant Trew were the best of the Gulls.

Seaford is in big trouble. The Tigers kicked just two goals against Mt Eliza on Saturday. Justin Van Unen was back from his hamstring injury and booted seven goals in the 14.18 (102) to 2.7 (19) victory. Dave Barton and Blair Whelan dominated. Kayle Henderson and Josh Stokes were the best of the Tigers.

Edithvale had 42 scoring shots to Karingal’s 22 on Saturday and recorded a 55-point win. Mick Meehan booted four goals and Brett O’Hanlon and Jarrod Garth three each for the Eagles while Aaron Paxton booted three for the Bulls. Matt Clark collected another best on ground for the Eagles while Stevey Mannix wasn’t far behind. Jordan Jones and Aaron Lees were the best of the Bulls.