Man in the middle navigates between friends ‘on both sides’ 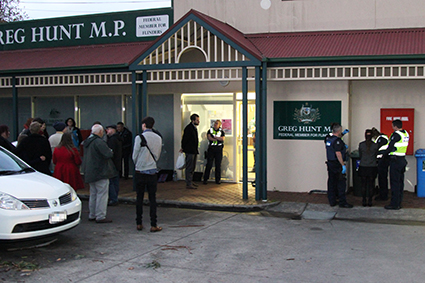 WHEN Christian protesters and staff at Greg Hunt’s electorate office in Hastings faced off last Wednesday one man had a foot in both opposing camps.

Chairman of the Liberal Party’s Flinders electorate Peter Rawlings is a members and former treasurer of the New Peninsula Baptist Church. He told The News he knew several of those involved in last Wednesday’s “gathering”, as he put it.

“I had friends on one side of the fence as it were, and friends on Greg’s staff on the other side.”

Mr Rawlings authored the National Schools Chaplaincy Program for the Howard government in 2006 and is chair of the Mornington Peninsula chaplaincy program, liaising with council and schools.

When he heard Love Makes A Way members had turned up at Mr Hunt’s office, Mr Rawlings tried to act as a peacemaker between both parties.

“It was a very tricky situation … they have every right to protest and no-one defies the right of an individual to protest as long as it’s peaceful and reasonable.

“But at 5pm, the electorate staff had every right to lock up and leave that building.”

Mr Rawlings praised police for their handling of the situation, having last year seen Christian protesters “dragged kicking and screaming by the police” at a similar protest at federal Liberal MP Josh Frydenberg’s electorate office in Kooyong.

But he criticised “older” members of Love Makes A Way who, he said, should have shown “leadership” to the younger members in their late teens and early 20s when police asked protesters to leave at 5pm.

Mr Rawlings hoped any subsequent convictions in court would not harm the career of those charged with trespass offences.

“They’re some of our best youth workers on the peninsula. They’ve all got working with children checks. Some of those young people may have blackened marks against their name and it would be a tragedy.”

He offered to help in any way possible “without perverting the course of justice”.

“I hope they might get a slap over the wrist.”

Mr Rawlings said the Abbott government had inherited the children in detention problem from the previous Labor government and “there’s not one member of the cabinet in Australia’s federal cabinet that wants to see one child in detention”.

“I think constructive dialogue and suggestions are the way forward. We shouldn’t be politicising this issue of children in detention offshore.”