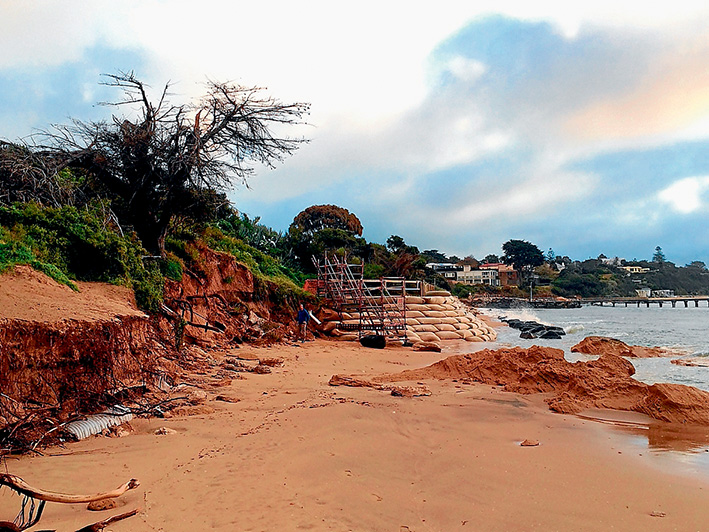 THE sorry saga of the destruction of Portsea’s front beach continues with further damage being done during last week’s windy weather and rough seas.

The extent of the erosion is increasing with ocean-like waves now also pounding either side of the sandbag wall, or revetment, installed by the state government in late 2010 at a cost of more than $1 million after the beach and foredune started being swept away in 2009.

Last week’s waves removed thousands of tonnes of sand and foredune from the eastern end of the beach, exposing the roots of old trees as well as rocks under the foredune, destabilising temporary steps (which were closed to the public on Thursday) and damaging more than 20 of the 1000 sandbags. A huge section of foreshore at the eastern end collapsed onto the beach and was washed away.

Josh Clark, general manager of Dive Victoria, which is based in Portsea and uses the pier for its diving tours, said it was a windy week “but we get them two or three times a year at least”.

He said the recent erosion had exposed rocks not seen in living memory as well as the remains of an old jetty. “There used to be an old pylon sticking out of the water by about 30 centimetres. Now it is well exposed with shorter pylons next to it also visible.”

Old hands say the beach has lost sand before including in the 1940s but it always returned. And erosion in earlier times did not destroy foredune areas.

Colin Watson of Portsea foreshore advisory group, who has been assertively lobbying the state government for several years asking it to find a solution, said the waves he saw last Tuesday were the biggest he had seen in more than 60 years of visiting the beach. “Big waves are now pounding a part of Fishermans Beach west of the pier.”

He said the extent of the swell hitting the shore had widened in the past six months or so.

“There is some hope on the horizon as a 12-month study of waves and the sea floor off Portsea will be completed in June,” he said.

Mr Watson said it might be possible to reshape the shipping channel that is believed to be causing the bigger swell hitting Portsea.

Divers, environmentalists and some locals blame the dredging of The Heads in 2009 for the destruction of the beach. The Port of Melbourne Corporation, state government authorities and the now-disbanded independent dredging umpire – the Office of the Environmental Monitor – blamed natural causes.

The cause may soon be known but then there will be debate about who will pay. However it is unlikely Portsea beach will ever be the same again.