Hastings go down to Somerville in a nail–biter 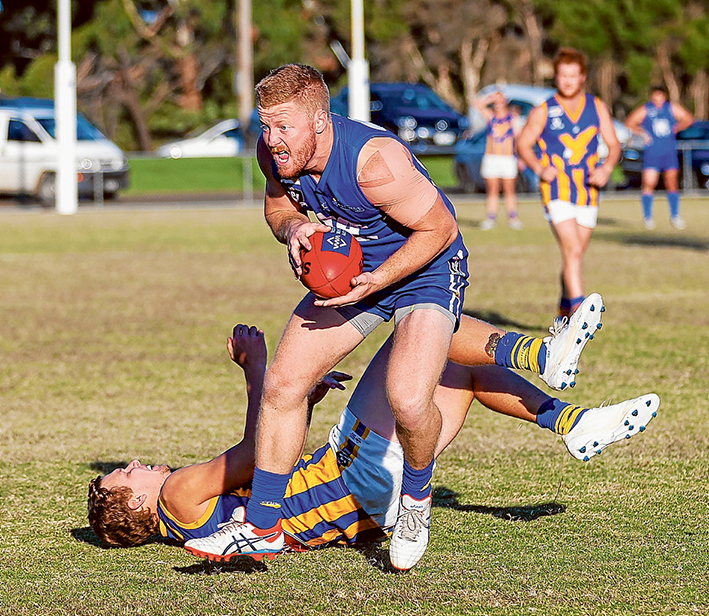 THE weekend saw the Blues face up against Somerville. It was a strange game that was low scoring and no team really dominated the other.

The boys played well in patches but for the most part we got beaten on the outside of the contest and this hurt us with them getting some easy football.

Our skills were not as good as they have been, and at times we went back to old habits and bombed the football which did not help our forwards.

Again we had more scoring opportunities but inaccurate kicking proved to be the difference in the end as well as two goals from undisciplined acts and frees.

All in all its not panic stations. It’s a loss to a good side and we know we have a lot of improvement left in us and I feel we had our chances to win but didn’t take them.

WE played Somerville in what was our biggest test so far this year.

The boys started ok in the first quarter and matched it with Somerville.

In the second quarter we made some bad mistakes which let Somerville kick some late quarter goals to get away to a three goal lead at halftime.

Into the third quarter the boys were asked to lift to try and get back in the game but unfortunately Somerville came out and lifted there intensity and really got on top of us with there run.

The last quarter the boys were urged to slow them up and put some scoreboard pressure on which they tried desperately to do but couldn’t shake the solid Somerville team to go down by a fair margin.

MISSING four crucial players, Hastings under 19s were not able to withstand a third quarter flurry of goals from Somerville.

They had 15 rotations per quarter compared to Hastings’ 0. A gallant effort ensued for the home side.

The most pleasing thing was the endeavour and ball movement from Hastings.

Kayne Lewis, Joel Goetz and Stephen Williams all had their best game for the season. The boys will regroup and have a well earned rest with the bye coming up and prepare to take Red Hill in the next round.

A BEAUTIFUL sunny day welcomed the Eagles girls to our courts with netball played with great sportsmanship and spirit.

C grade started well but had periods in the match where they went missing but to their credit they kept at it and finished strongly. Courtney was fantastic in defence gaining more confidence with each week.

B grade welcomed Renee Owen back after a few weeks out with injury. Unfortunately the girls didn’t get the win against a pretty strong Sommy team.

With the sun still shining the A grade took on a tall, strong Somerville side. There were definitely many positives to come out of our match. When we moved to ball quickly and confidently the benefits paid off. Ebony Clark worked so hard all day, and she was our best on court.

Our next game is away Vs Red Hill Lets make sure we get a big crowd there to support the boys and girls.