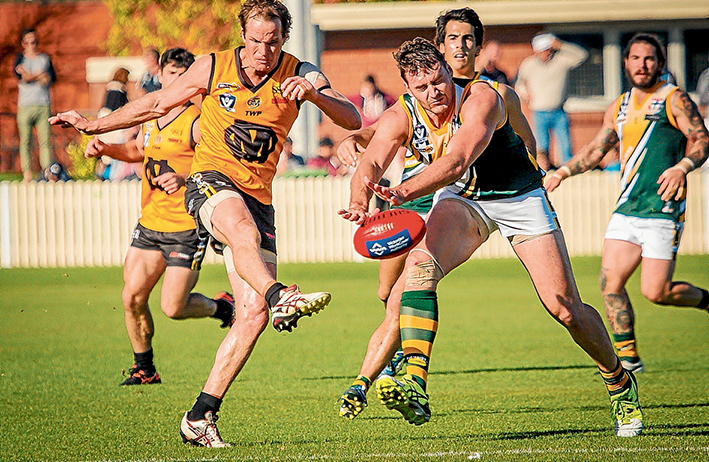 The visitors beat their more fancied opponents for the third time in as many meetings after knocking them over at Frankston Park and Optus Oval in previous meetings.

Other than trailing by two points at quarter time, Peninsula FL controlled the game for most of the match. There were some tense moments in the final quarter when Ovens & Murray made a charge in front of their home crowd.

Despite the home ground advantage and AFL talent including interleague coach Brendan Fevola, Matt Prendergast and Dean Polo, Peninsula Football League was able to hang on to record an 11.14 (80) to 10.10 (70) victory.

Peninsula FL set up the win with an explosive second quarter which netted 5.4 to one straight goal. The visitors coughed up a number of opportunities in the first half and could have iced the game in the opening hour.

Edithvale skipper Stevey Mannix was doing the job for Peninsula FL through the middle of the ground and Langwarrin skipper Scott Sienkiewicz, who was awarded the VCFL medal for being the best player on the ground, was in and under and doing the hard things.

Peninsula FL went into the match with only one ruckman, Bonbeach’s Dylan Jones. The move paid off, allowing the visitors to have some run in their legs when it mattered most late in the game.

Former Richmond player and Edithvale-Aspendale star Brett O’Hanlon booted three goals for the winners while Pines’ Aaron Edwards, YCW’s Anthony Bruhn and Seaford coach Ben Crowe finished with two goals each. Crowe was even used in the ruck at times to gives Jones a spell.

Warwick Miller was named vice captain of the side and he did a superb job down back, while Mornington’s Adam Symes kept Fevola to just one goal.

Pines’ gun Luke Potts had a heap of the footy through the middle of the ground and the composed Sam Gill from Mt Eliza was cool in the crisis and provided plenty of drive from half back.

It was an impressive win for the Peninsula FL, who went into the game without the likes of Ash Eames, Anthony Barry, Michael Gay, Justin Van Unen, Rohan Heasley, Matthew Clark and Brent Guerra.

According to Ovens & Murray media man Rob McKinlay, his league picked a team that was experienced and hardened.

“Before the game we said that Peninsula FL was  embarrassed  last season against Geelong and would be looking to send a message,” McKinlay said.

“Our boys have taken a pretty relaxed approach to the match and don’t really know what to expect from the opposition,” McKinlay said before the game.

“We don’t want to lose though because that drops us back to a five/six ranking, which means its three years before you get another chance to challenge for the number one title.”

After the game, McKinlay said the loss would “smash the ego of the group”.

“Fev (Brendan Fevola) said Ovens & Murray was the best league in Victoria in the lead up and now we drop back to the third tier.

“He was contracted for three years by the league to take us back to number one. It will be interesting to see what happens now,” McKinlay said.

Whilst Ovens & Murray players were playing golf on Friday, Peninsula FL was travelling five hours up the Hume Highway to make a statement.

Before the game, Peninsula FL coach Troy Shannon said his charges hadn’t travelled the distance to embarrass themselves.

“They (O&M) have picked 15 midfielders and generally a team full of talent,” Shannon said.

“We have picked a team. Back pocket players in the pockets, wingers on the wing and forwards in their spots. We didn’t want a team of midfielders playing in pockets.

“Our preparation started in the pre-season and this is the reward for effort. Geelong FL did the same last year and look what they did to us.

“We were as prepared as we could be. We picked a team we were confident would be good enough to get the job done and we knew as much as we possibility could about the opposition. We knew who their good players were, their capabilities and what we needed to do to stop them.

“We knew they would come home strong because of the brand of footy we played for the first three quarters, however, I was always pretty confident we would hang on.