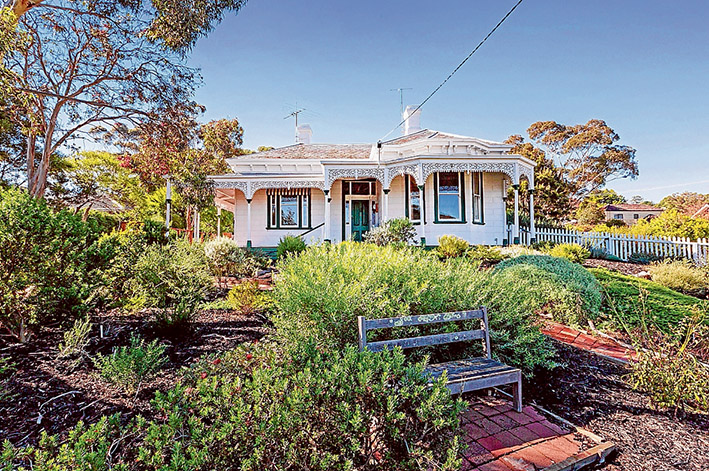 ONE of Mornington’s iconic properties of the 19th century is on the market for $1.6 million.

Mossgiel at 28 Bath St near the base of Beleura Hill and within a short stroll of Mills Beach will be auctioned on Saturday 13 June.

The 2790-square metre property with its Italianate house is on the corner of Bath and Whitby streets, and has been owned by Philip and Moira Robinson of Robinson’s Bookshop fame since 1961. The couple opened their shop in Frankston in 1965 and sold it in 1993. It continues to trade.

The Robinsons are selling because they want to be within easy walking distance of “the library and the shops” and the big garden is becoming harder to maintain. They are long-time members of the Australian Native Plants Society and Peninsula Music Society. Moira is widely known as a lecturer, critic and champion of children’s literature.

The couple, who raised four children in the four-bedroom house, have bought a 1930s-era house near Main St with room for their eight grandchildren to stay.

Mossgiel is heritage listed. If it was a vacant block it could be worth as much as $2.5 million. “That’s the downside of owning a heritage property,” Mr Robinson said. “Mornington Peninsula Shire recently put heritage overlays on 60 properties and in many cases the overlay reduces the value of the property, but no compensation is suggested.”

The property is named after the 1780s farm of “the national poet of Scotland”, “the Ploughman Poet”, Robert Burns (1759-96), who reputedly wrote many of his famous works at the farm.

Moors had earlier bought land on the corner of Bath and Morell streets, closer to the beach, in July 1881.

“The land was subdivided in 1874 into 1.5 to 4 acre lots. It was reportedly not until 1879 that Balcombe’s executors auctioned the land for building purposes.

“Titles show that Joseph Wilmouth purchased land on the corner of Bath St and High St (now Morell St) in September 1875 and sold the property to Eliza Roberts in May 1891.” Roberts sold to Moors.

“This is a truly unique opportunity to restore and preserve an important piece of local history.”