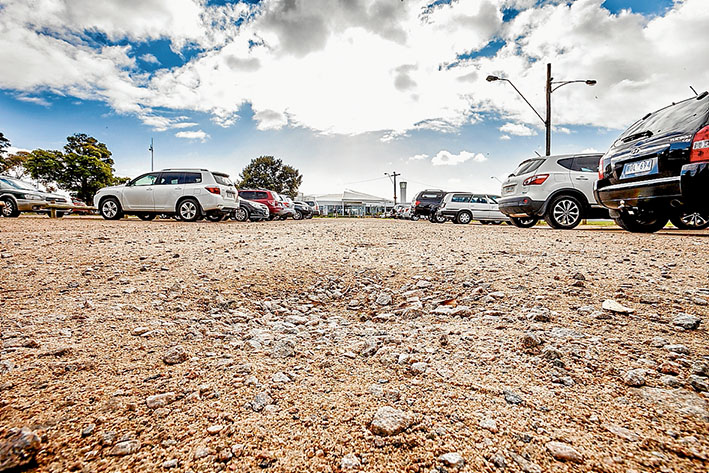 THE shire has more than 250 unsealed car parks and asphalting the 25 at the top of a newly created priority list could take up to 15 years and cost $10 million.

These and other mind-boggling statistics were presented to the council at its 25 May meeting in Rosebud when councillors wrestled with the usefulness or otherwise of the shire’s new “Unmade car park construction strategy”.

A large number of resident complaints are generated by unsealed car parks scattered throughout the 720-square kilometre shire with its 42 townships.

Residents ring and complain about potholes. They complain about dust in summer and mud in winter; about people in wheelchairs getting stuck in ruts and holes, and toddlers falling over uneven ground

Half the so-called top 25 are in commercial areas and could be financed by a “special charge scheme” where traders would pay a levy but the shire won’t force this on towns; it’s too unpopular and many traders would struggle to pay.

The shire’s team leader of infrastructure planning Ross Gregory faced a grilling from councillors as they batted for their own wards and debating the strategy’s merits.

Mr Gregory said there were 25 category A car parks and 20 in category B that the shire intended to seal. Others would continue to be graded and have gravel laid.

Two councillors were miffed the “live matrix” listing car parks had spelling, address and status errors. Mr Gregory said they would be fixed.

Cr Lynn Bowden of Watson Ward (Somerville, Baxter, Tyabb) asked Mr Gregory how they had been ranked. “Any particular car parks?” he asked. “Yes, all the ones in my ward,” she said to laughter.

Cr Bowden said residents had given up asking for car parks to be sealed as nothing ever happened. She was concerned well-used car parks like the one at Baxter Primary School were low on the list. “Certainly the parents using this car park would not agree with it being at number 38,” she said. Other councillors questioned the ranking of car parks in their patches.

Mr Gregory’s boss Alison Leighton walked across the hall and sat beside him as the councillors’ questions kept coming, some more stridently asked than others.

“We’ve had an extensive engagement process involving traders and other members of the community,” she said firmly. “We considered a whole range of factors when putting the priority list together.”

There had been an extensive consultation process to develop the strategy – a workshop for officers, two councillor briefings, a workshop with users of unsealed car parks, and public exhibition of the draft strategy.

She said it was a “live document” and the order of car parks could be changed by the council. “We’re presenting the methodology to councillors tonight.” This was Ms Leighton being polite and implying councillors should give Mr Gregory a break.

Cr Hugh Fraser said if the shire sealed two car parks a year as was currently occurring it would take 125 years to complete them.

Cr David Gibb said many of the car parks were associated with schools on council-owned and Education Department land.

A staunch foe of cost shifting, he said the shire should not be sealing school car parks as it was a state government responsibility.

He said the Education Department had a policy of not spending money on footpaths for schools let alone car parks.

Cr Tim Rodgers said the strategy was like the shire’s pavilion strategy and the toilet strategy – too much money was being spent on two few facilities. He wanted the list to be rejigged and car parks categorised according to how much work was needed to bring them up to scratch. Some might need minor work and “we could do a number in a short time”, he said.

Cr Andrew Dixon called on his colleagues to approve the strategy. It went through 6-4.