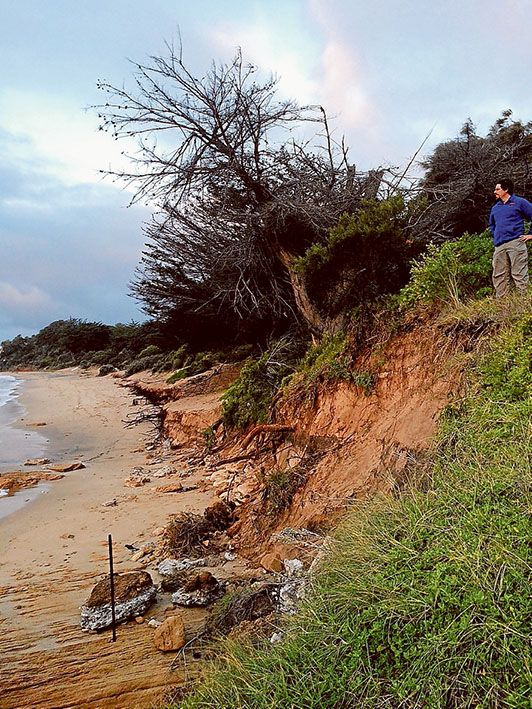 PHOTOS of recent erosion at Portsea beach show what happens when supposed experts ignore the fundamental laws of nature, and continue to throw millions of dollars of taxpayers’ funds at Bandaid “solutions” to complex issues.

Sadly, these costly and useless efforts have been driven by government feeling it must respond to the shrill demands from various vested interests to “do something” to save the beach. Well, it hasn’t worked so what now?

These hapless, ill-informed works to mitigate the damage have “hardened up” the coastline with sandbags and rocks, but have just moved the problem down to the next section of sandy beach and dunes, which are now collapsing. It’s pretty sad that the supposed experts in our environmental and planning departments seem oblivious to what Sir Isaac Newton worked out 350 years ago (Third Law) – that for every action, there is always an equal and opposite reaction. Energy is never destroyed it is merely transformed or moved.

Until experts get their heads around that immutable, fundamental law of nature, and understand we must work with and not against nature, and not just react to calls to “do something”, they will be throwing good money after bad. We will destroy what remains of our natural coastal beauty, and the vested interests will still be demanding that governments “do something”.

The millions of dollars spent have had no impact on the twofold problem for government: retaining their image of being competent, and actually doing something to arrest the damage. It hasn’t improved their image as competent at managing our coastal assets and it certainly hasn’t improved Portsea beach. Indeed, the beach has got worse and worse. It has all but disappeared, and what’s left is ugly, unsafe and certainly not worthy of a visit from all those tourists that the state government and Mornington Peninsula Shire seem to think are the backbone of our local economy.

There is no logical end point to this multimillion dollar hardening up of our coastline. If we continue with this outmoded logic, how long before we have a wall of masonry right around Port Phillip? It’s time to bite the bullet and resolve that there will be no more projects that attempt to re-arrange and push back against nature. Our efforts from now on must go towards restoring nature and the protections that it provides to us. And there will be plenty of jobs – and in my opinion more satisfying and worthwhile ones – if we turn over that new leaf.

Since channel deepening ended in 2009, successive state governments have spent millions of taxpayers’ dollars trying to retain some beach at Portsea, desperately trying to come up with consultants’ reports that do not draw the increasingly obvious conclusion that it has all gone horribly wrong since the substantial deepening at Port Phillip Heads during the Channel Deepening Project (2008–09).

And, it is also possible that the CDP may have not only contributed to the erosion, but also impeded subsequent recovery of the beach. One brave consultant (Water Technology, March 2013) estimated that the CDP dredging had produced “significant” local increases in significant wave height of 7-10 per cent, and wave energy density of 15-20 per cent, at Portsea’s front beach. The CSIRO (April 2013) found it was “conceivable that the CDP may have increased the height of waves impacting the beach at Portsea and therefore some degree of attribution to the CDP is possible”. It’s notable that the tender for the 12-month and latest study awarded by the government in June 2014 was not given to Water Technology, which could have built on the work it had already undertaken.

Port Phillip Conservation Council is advocating that before any further dredging in Port Phillip and especially at The Heads occurs (as mooted if the “Bay West” port expansion proceeds) a study of sea levels in Port Phillip for the 20 years 1995-2015 should be undertaken to compare sea levels preceding the CDP (1995-2008) with sea levels since then (2009-2015) for Victorian tide gauge stations inside and outside Port Phillip. We recently wrote to Premier Daniel Andrews to request that such a study be undertaken.