Gulls fight from ‘nowhere’ to win a thriller 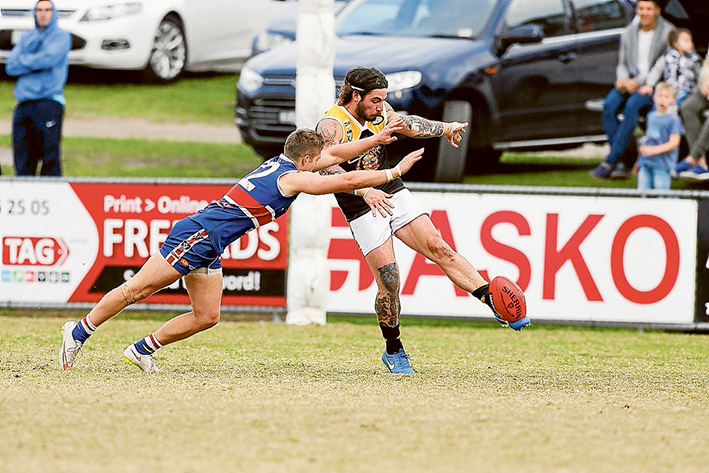 CHELSEA came back from nowhere to record a thrilling two-point victory against Langwarrin on Saturday in Peninsula League Football.

Looking down the barrel midway through the last quarter and trailing by three goals, Chelsea kicked five unanswered goals to wrestle back the lead and open-up a 10-point lead at the 27-minute mark of the quarter.

Hudson Thomas, who finished the game with four goals for the Gulls and was arguably one of the best players on the ground, put his side in front before Jayden Attard extended the lead with five minutes left in the game.

Langwarrin went into the game without Rikki Johnston for personal reasons while the coach, Gavin Artico, was in Fiji on a family holiday. It was a massive loss for the Kangas, who less than a month ago beat Frankston YCW.

Langwarrin went from an opportunity to be sitting comfortably in third place to dropping out of the five. They gave away a handful of 50m penalties in the painful loss.

Andrew Johnson played his first game for the season in the firsts for Langwarrin and finished with five goals while Blake Harkness was his team’s best player for the second week in a row.

Chelsea is now a game and a half outside of the top five and coach Brent Guerra believes he’s team is a chance to grab a finals spot.

“We were very competitive against Mornington and Mt Eliza but let ourselves down in one quarter of footy,” Guerra said.

“Our boys are still learning the art of winning and Saturday’s fighting victory will hold them in good stead for the rest of the year.

“The art now is not to get ahead of ourselves. We play Karingal this week and we know they aren’t travelling as well as they’d like. We have Pines after that.

“It would be fantastic for the group to win a few in a row. That’s our aim. Work hard on the track, stay focussed, keep doing the things we know we do well and the results will look after themselves,” Guerra said.

The Redlegs booted 10 goals in a blistering second quarter with Matt Lillie (three goals) playing extremely well in attack and through the ruck and Dave Barton continuing his outstanding season. Grant Goodall was superb in the ruck for the Bulls and Luke Van Raay worked tirelessly.

Mornington stuck its nose in front of Frankston YCW early in its home ground clash and was able to maintain that buffer for the rest of the match.

Mornington ruckman Michael Gay was the best player on the ground, dominating the ruck, while Dale Nolan finished with four goals and Ben Wells saw a heap of the footy.

Tony Lester and Kyle Hutchison were the best of the Stonecats.