Hillmen sink to a new low 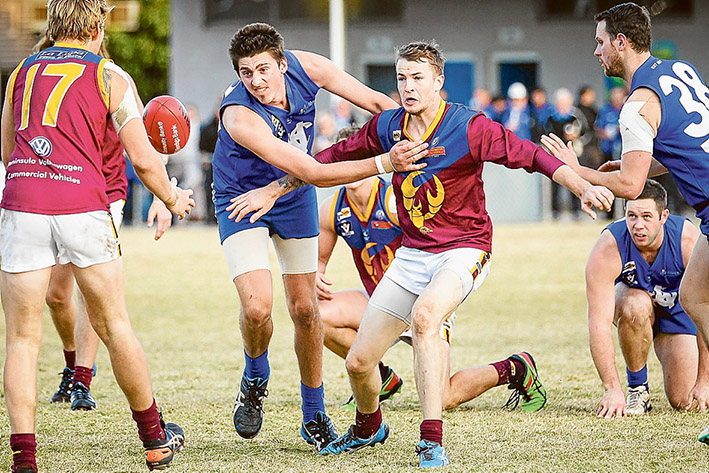 RED Hill has dropped to fourth place on the ladder after losing its third game in succession in embarrassing fashion on Saturday.

For the second match in a row, Red Hill failed to score in the second and third quarters after leading at quarter time.

That means that the Hillmen have failed to hit the scoreboard in four of its past six quarters.

Red Hill kicked a goal after the quarter time siren through a ripper from Benny McGuiness on the boundary line to give the visitors a 4.3 (27) to 1.5 (11) lead.

However, the Hillmen didn’t trouble the scorers again for the next 49 minutes, when they scored a rushed behind.

Embarrassing isn’t a term that footballers would like to be labelled after a game of footy. Witches hats would be even more offensive I suspect.

However, that’s the only way to describe the Hillmen’s performance. They simply gave up half way through the second quarter.

Red Hill gave it their all early in the third quarter too but when Rosebud hit the scoreboard again, down went their heads.

It’s easy to point the finger at the coach after these horrible losses and question their ability to have strategies the stop the onslaught.

However, as Red Hill coach Tony Blackford pointed out, he is almost powerless to respond to pressure.

“I asked for effort. That’s all I wanted from the boys today across four quarters. At quarter time, I couldn’t have been happier with their output,” said Blackford.

“However, when the blow torch got turned on them in the second quarter, the effort disappeared. They had no fight in them. You’re right, they just gave up.

“I might be wrong but I think that (effort and desire) comes from the individual, not something the coach can manufacture.

“Rosebud were superb, take nothing away from them. Their hunger and appetite for every contest was first class. We just folded and let them take control,” a shattered Blackford said.

While the big story was Red Hill’s pathetic performance, the positive spin was Rosebud’s absolute domination.

The Buds booted 20.9 to 2.2 after quarter time. Tom Baker booted eight goals in the final three quarters to again be the dominant player on the ground.

Greg Bentley was magnificent leading out of the attacking 50 and Jason Bristow, Ryan Spooner and Rhys Bancroft smashed the Hillmen through the middle of the ground.

The Rosebud small forwards in Cade Williams (four goals) and Glen Peterson (two goals) were also a nuisance while Keegan Downie was the best player on the ground in the first half and finished with three goals. Off half back, Nick Boswell had his own footy.

The only negative for the Buds was the broken jaw suffered by Rob Forrest late in the second quarter. He was dominating to that point.

A very happy Rosebud coach Nick Jewell said after the game that the key for his side was pressure.

“When we played Red Hill the first time they had 108 marks. Today they had 44,” said Jewell.

“The key for us was to put pressure on their ball carriers and make it hard for them to kick cleanly.

“We had 60 tackles to their 40-odd, despite winning comfortably, so it showed we still worked hard even when we were in control.

“Adversely, Red Hill had 20 tackles in the first quarter, which is their quota, before having 11, 9 and 9 in the next three quarters.

“That says it all,” Blackford said. “We chased tail all afternoon but still couldn’t work hard enough to lay tackles. It was very disappointing.”

Despite saying before the game that scrapping is his team’s strategy, the Buds clearly showed they have a sensational ability to attack.

If I was coaching Rosebud and the armoury that they possess, I’d be encouraging them to move the ball quickly like they did against Red Hill. It was the best brand of footy yours truly has seen this season.

The Panthers kicked away in the second quarter and held off a fast finishing Magpies in the last.

Meadows’ coach Glenn Michie led from the front with five goals in a best on ground performance.

Dromana led 32 to 16 at quarter time but Rye hit back in the second and were never headed.

Ryan Mullet and Brodie Egan dominated for the Demons while Sammy Guerts and Shaun Clarke were superb for the Tigers.

Leigh Poholke booted six to be one of the team’s best while Leigh Treeby dominated. In further good news for the Sharks, Myles Pitt will be back in two weeks, cutting back his overseas trip by six weeks.

Somerville put a couple of horrid weeks off the field behind them with a strong four quarter effort against Frankston Bombers.

The Eagles set up the win with a seven goal to two second quarter. Scott Simpson booted four goals for the winners while Beau Muston kicked five for the Bombers.