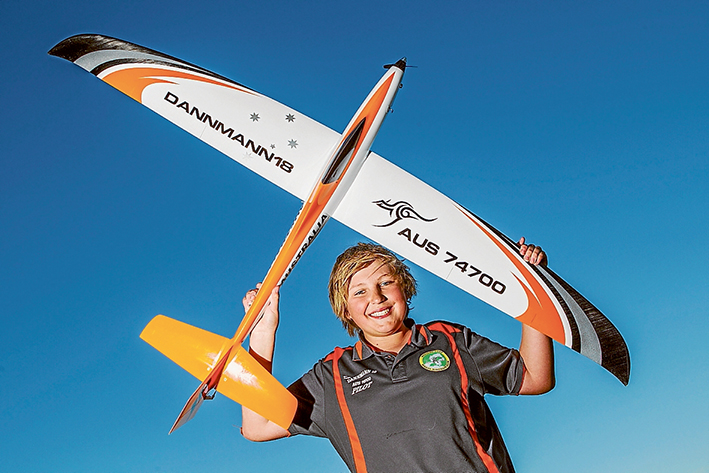 SITTING around at home after a series of ankle operations didn’t appeal to Mornington student Daniel Arapakis. He couldn’t walk but he still wanted to do something interesting.

That “something” has now earned him a place as a junior in the Australian team to contest the world model aeroplane championships in the Czech Republic next month.

Daniel, 13, will contest the F3D class – the Formula 1 of model aeroplane flying. It’s the fastest class in the world, reaching speeds of 350kph.

His opponents are 50 other world-class flyers whose average age is 30.

“It’s so much fun; I love it,” he said last week. “It’s something I can do that impresses people, but it requires a lot of practise.”

Good hand-to-eye coordination and complete concentration is vital, he says, as is “sticking to a race plan”.

Maintaining a fast but steady pace around the course is the best tactic, leaving an all-out assault on the fastest times to the final two races, when the worst two results can be discarded.

“The trick is not to freak out if things go wrong,” Daniel said.

His plane is several classes removed from the $200 starter plane bought from a Hastings hobby shop in the beginning. It was suitable at the time, but was only a stepping stone as the young pilot pushed himself to be the best with the best plane.

The Padua College student and member of the Western Port Model Aeroplane Club has been racing pylon planes – so called because they race around pylons – for two and a half years, practising most weekends since October, competing in the season’s race calendar and hoping to qualify for the Australian team in the world championships.

Each 400-metre lap has three turns and competitors must complete 10 laps in under 60 seconds.

The world championship is held every two years and an entrant team can only consist of one junior (aged under 18) and three seniors.

The first was at the Australian championships last June at Maryborough, Queensland.

“The next qualifying event was the state championships at Munro, near Bairnsdale, in August. Dan is the youngest pilot in Australia flying in this class and he won the junior category and also came third overall in the men’s open division.”

Daniel’s Minute Master plane was custom designed by his coach, Barry Murphy. It is fibreglass and carbon, making it light weight (2250 grams) and very strong. It travels at 350kph and pulls 40gs in the turns. The 1.8 metre long wing was custom made in Queensland and the fuselage is from Werribee.

The plane’s MB40 engines are custom made in Holland and enhanced by Mr Murphy. They race at 33,000rpm and have hand carved carbon propellers also designed and built by Mr Murphy.

“The Murphy family are world renowned for some of the quickest and most reliable planes in the world,” Mr  Arapakis said.

“Daniel has been practising weekly at the Munro field for almost 20 months to prepare and fine tune the engine start-up procedure and flight skills. He has race-prepared four models that will be air freighted to Europe next week in time for the world championships.”

While flying model aeroplanes is only a hobby now, Daniel sees it as his future. “I love planes and want to fly them all my life: this is where my future lies.”