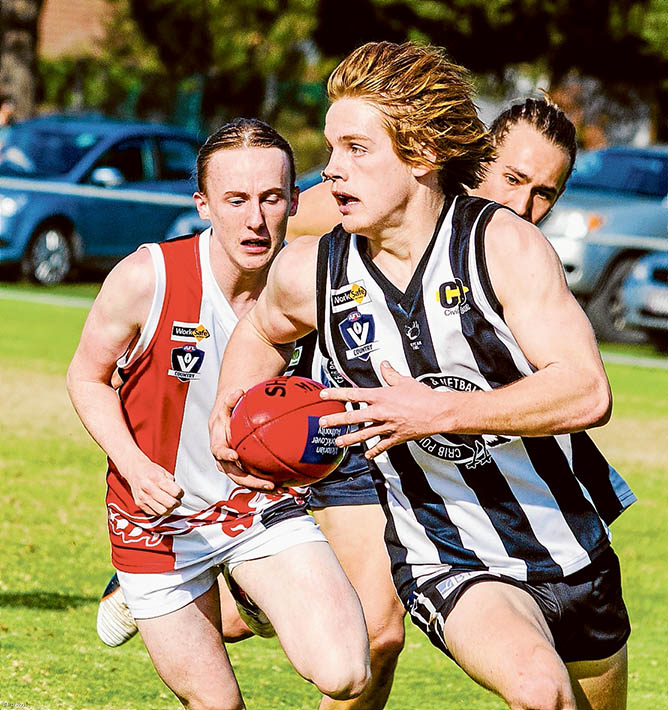 CRIB POINT remains winless on their home deck after a narrow 4 point loss to Devon Meadows on Saturday.

The game ended in nail biting fashion with Crib Point surging late and having a few chances late in the game to pinch the lead but failing to do so before time ran out.

The Pies put in a stuttering performance managing five goals in their first three quarters before piling on six in the final term only to fall short.

Had the Pies got up it probably wouldn’t have been warranted as Devon Meadows were the better side throughout the day and Crib really only played the better football for a 25-minute stretch late in the game.

Despite the disappointing result there were some positive personal performances with Dean Kairies putting in a best afield game across the half back line.

Evergreen Michael Cook also played another ripping game in the backline with Luke Herrington doing what he does each week through the middle.

The reserves for the second game in a row played a game that was almost a carbon copy of what happened in the seniors with a sub-par performance for three quarters before clicking into gear when the sting went out of game late to go down by 20 points.

After a great win a fortnight earlier, the discipline deserted the reserves with a few of the bad habits creeping back in.

To the side’s credit, they managed to pull themselves out of it and finish strongly but should never have let it get to that in the first place.

Neil Clark was a clear cut best afield clunking mark after mark and in his current form can really solve some of the issues facing the seniors such as having a big marking target in the forward line.

Dan White also played a great game and is really knocking on the door for a senior recall which would be his first since his knee injury several years ago.

The 19s delivered an 84 point win and percentage boost as their confidence continues to build as the season progresses.

The boys have answered nearly all challenges presented to them this year and are getting the results they thoroughly deserve after sticking fat through a few lean years.

After an up and down first half the boys really clicked into gear with a nine goal to zero second half.

Tyler Wilton has one hand on the goal kicking trophy with a seven goal haul and captain Liam O’Connor was best afield from the middle with a dominant display.

Billy Heritage keeps getting better each week and snagged three goals to give another avenue to goal which provides plenty of headaches for opposing clubs.

The under 19s have really been the pride of the club and been very exciting to watch each week and lead the way in how to go about it. Keep a lid on it though boys, it’s still a long season!