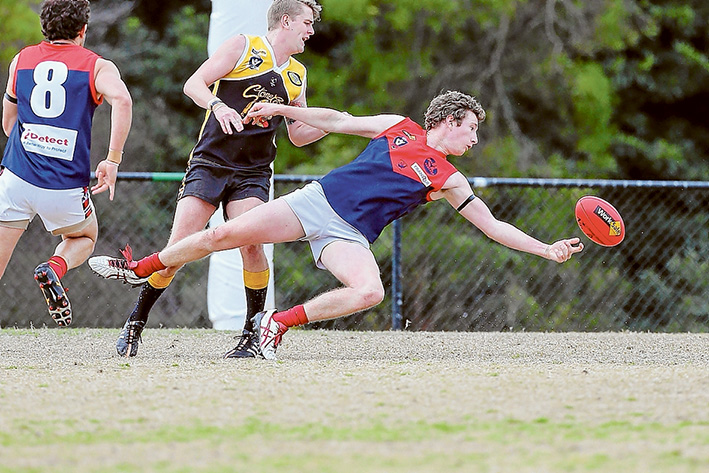 MT ELIZA has an enormous amount of work to do if it is going to win that elusive Peninsula League premiership in 2015 after a poor showing against Frankston YCW on Saturday.

It was billed as the match of the season. Fact is, it was an absolute fizzer.

The ball spent more than 70 per cent of the game in the Stonecats’ front half of the ground and 37 scoring shots to 20 was a reasonable tale of the afternoon.

The Redlegs engine room of Dave Barton, Ben Landry and Rohan Heasley netted just 42 possessions between them. Of those 42 possessions, more than half would have been ineffective hack kicks.

Darren Booth and Sam Gill, usually prolific ball winners across half back, were under enormous pressure all afternoon and were restricted in their ability to dictate the way the game is played.

Mt Eliza was unbelievably predictable from the first bounce to the final siren. They didn’t change their style, giving the impression that there was no ‘Plan B’.

The Redlegs didn’t change the angles, didn’t switch play, didn’t go short, didn’t play on and didn’t have a third man up against the best ruckman in the competition in Ash Eames – there was nothing.

The only thing that the Mounties did seem to try was to take their two ruckman in Matt Lillie and Jordan Capkin off the ground and throw an undersized James Anwyl into the ruck.

I’m not sure what that achieved because the Stonecats booted five goals to one during the period and clearance work was made so much easier.

All credit to Frankston YCW though. The Stonecats forced Mt Eliza to second guess themselves and play the way they did. They simply prevented the Redlegs from playing their own game.

Frankston YCW protected the corridor, shut down those who needed to be shut down and prevented the opposition’s run from half back.

Numbers got back to support the defence and strangle the dangerous Justin Van Unen. Van Unen was named in the best with four goals but two of them were from dubious free kicks in the goal square and he would not have had more than six touches.

Daniel Waddell completely shut him down.

Kyle Hutchison was the best four quarter performer on the ground, while Tony Lester and Lachy Wallace completely dominated the first half. Ryan Santon wasn’t named in the team’s best but was clearly one of the best players on the ground.

D’Orazio did a wonderful job on both Dave Bodley and Anthony Bruhn and was the only effective defender. Clayton played in various positions in defence, attack and through the middle and worked tirelessly.

James Freeman was back from the Stingrays and had countless possessions. Freeman was the only player who tried to take on the opposition and create something. He was rewarded with two last quarter goals.

It was vintage Frankston YCW on Saturday. Other than Ricky Morris, they had their best 22 on the park with the inclusion on Saturday of Luke Collins, Lachy Wallace, Jesse Coghlan and Anthony Barry.

Pines for the second time this season proved that the difference between the top four sides and those vying for fifth place is poles apart.

The Pythons took on Langwarrin at home on Saturday and other than a tight first quarter, completely smashed the opposition.

Guy Hendry loves giving it to Langwarrin and he did again with five gaols while Harley Parker was dangerous too with four majors.

Luke Holdcroft has become one of the best stoppers in the competition and he was at it again on Saturday while Aaron Edwards was first class.

Langwarrin had a handful out with the likes of Scott Sienkiewics, Jayden Grose, Ethan Rahilly, Matt Dimkos, Gerard Brown and Andrew Withers not playing.

Rikki Johnston earned himself yet another three club votes and would be miles ahead in the club B&F while Sean Herdman and Michael Parker were also hard workers.

Bonbeach went from beating Mornington to getting beaten by Seaford on Saturday.

It was a convincing victory. Aaron Walton led from the front with six goals in a best on ground performance while Dean Williamson and Josh Stokes, arguably the Tigers’ best players, were at the top of their game.

Some household MPNFL surnames in Jackson Sole and Gary Carpenter were the best of the Sharks.

Mornington bounced back from its shock loss to Bonbeach last week to beat Karingal 20.18 (138) to 7.7 (49). The margin was seven points at quarter time and 27 point at half time.

Jackson Calder was back and booted four goals, along with Jake Smart. Josh Halsall and Chris Baker were the best of the Doggies.

Aaron’s Paxton and Lees were the best of the Bulls, along with Brodie Kempster and Bevan Malloy, who made a return to help out his old club.

Edithvale and Chelsea went toe to toe in the traditional Sunday game.