Lacklustre Pies go down to Somerville 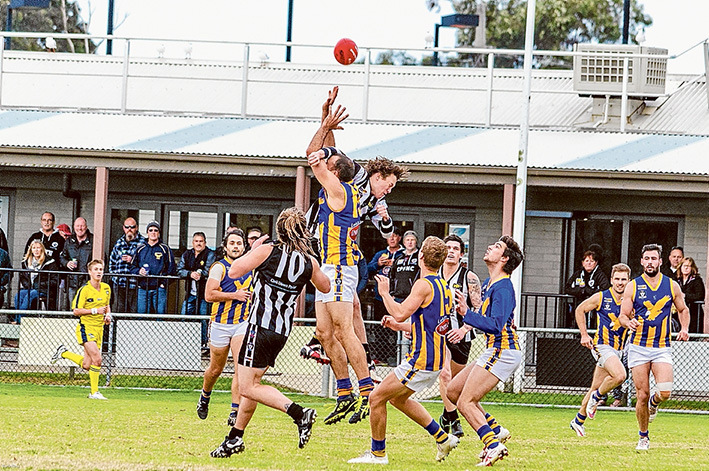 CRIB Point remain winless at home for 2015, as it suffered its second consecutive heavy defeat against Somerville over the weekend.

Last year’s grand finalists are a shadow of themselves this year as they’ve been decimated with injuries and sub-par form as their season drifted away over the last few weeks.

The Pies were never in the contest from the start with a six goal blitz from Somerville in the opening term putting the game out of reach early.

After quarter time the Magpies toiled away but were hugely undermanned as avenues to goal were hard to come by throughout the game.

In a game where there were few winners across the lines, Luke Herrington kicked three and was best afield, James Forecast provided plenty of run across half back, and James Cook toiled hard in the ruck.

The upside for the Pies is they get another week off to ponder where they’re at. There are a few players on the sidelines ready to come back for Pearcedale which should bolster the ranks.

The scoreboard in the reserves game probably didn’t do the outcome of the game justice for Crib Point as the reserves toiled admirably against the probable 2015 reserve grade premiers, Somerville.

The intensity was up on previous weeks, even if the talent on field was short. Like the seniors the reserves don’t have a way to kick bags of goals with half a dozen of their players playing senior football each week.

With their two captains, and two vice captains out of the team either playing firsts or injured, Danny Edwards led from the front in a best on ground display for his second consecutive game.

You could not fault the effort and should that be brought to Pearcedale in a fortnight’s time, the reserves will post win number three.

The under 19s were dealt a mini reality check with a nine point loss to Somerville to keep their ambitions on the season in check.

Despite being in touch the kids never really had control as Somerville held a slim lead for most of the day.

The run and carry of previous weeks was not quite there and the 19s need to find other avenues to goal when Wilton is kept quiet because all the good teams will have good defenders. In addition, the blaming of umpires is a poor look; the best side won on the day.

The lads need to take it as a lesson and move on quickly. They have a huge opportunity that they may only get once in their entire football careers. Only they can control the outcome of their season.