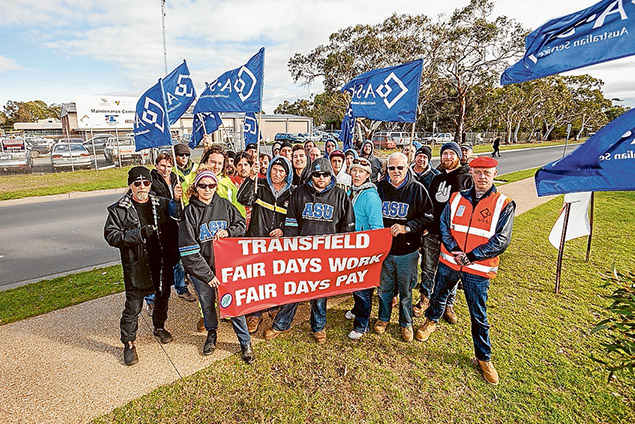 It is believed to be the first industrial action for 15 years at Transfield.

James Weissmann of the Australian Services Union said employees and the company were at a standoff after negotiations for a new enterprise bargaining agreement (EBA) broke down.

The ASU is the main union of local government employees.

Mr Weissmann said the EBA expired in April but Transfield and union had failed to agree on “three important items”:

Mr Weissmann said many workers lived from pay to pay and could not afford to wait a fortnight.

“We’re really disappointed negotiations have broken down,” he said. “Our workers accepted lower pay increases when we did EBAs with Transfield in 2009 and 2012.” He said retrospectivity had recently been removed from the negotiating table by Transfield, which was “outrageous”.

He conceded Transfield had upped its offer from 2 to 3 per cent. “The out-standing matters are minor; our employees have been more than reasonable.”

The picket, now known in industrial relations parlance as a “protest assembly”, lasted all day. Mr Weissmann said no vehicles had been stopped from entering or leaving the depot. More than 30 workers manned the “assembly”.

Last December, Transfield announced $73 million underlying net profit for the year to the end of June. Earnings were up 7 per cent to $217 million. Transfield said it expected to generate earnings in the range of $240-260 million in 2015-16.

The shire awarded its first infrastructure contract to Transfield in early 1997 after the shire disbanded its maintenance department. At the time the contract was the biggest of its type in Victoria and was worth $9.7 million in the first year.

In March 2013, the shire signed three new contracts with Transfield worth a total of $190 million over 10 years for management and maintenance of the shire’s $1.4 billion of assets – buildings, furniture, signs, parks and roadsides. It also covered customer service and community engagement services.

The shire had its own rumble with the ASU in March after it was taken to the Fair Work Commission, which ordered the shire to stop laying off staff and negotiate with those who had been terminated by new CEO Carl Cowie.

“ASU members stopped work to meet on Wednesday 1 July from about” 7.30am to 4pm. “ASU members returned to work on Thursday 2 July to recommence normal duties.

“Transfield Services continues to be committed to bargaining in good faith with our workforce and their representatives for a new enterprise agreement that includes provision for a reasonable wage increase that is sustainable without compromising the viability of our fixed-price contract with” the shire.

The shire’s infrastructure director Alison Leighton said Transfield had advised the shire that any industrial action would not impact on the delivery of services, which included “maintenance of 1730 hectares of active and passive open spaces including foreshores, roadsides and four shire-maintained cemeteries” as well as “maintenance of more than 600 shire buildings, including security, energy management, cleaning, graffiti management and essential services”.