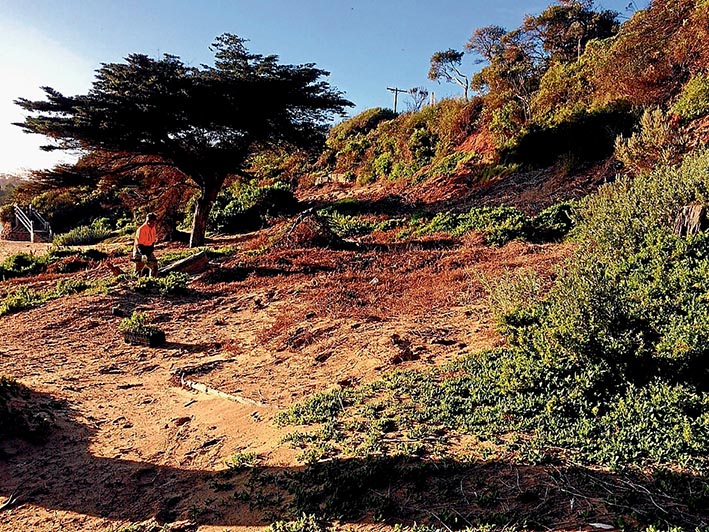 VANDALS have destroyed hundreds of trees planted on the foreshore at Mothers Beach in Mornington twice in the same week.

The trees, their stakes and plastic guards were stomped on and pushed over on Sunday night last week.

Jan Oliver of Mornington Environment Association, one of several groups working with Naturelinks to improve the town’s foreshore, said the damage was hard to comprehend.

“It would appear the first time was simply vandalism – perhaps kids – but the second time all trees, guards and stakes were removed, which seems to indicate they have been taken by someone for their own use,” she said.

She said the area would be replanted for a third time using special tree guards.

Ms Oliver said there had been a spate of minor vandalism in the town in recent times including revegetated areas damaged at Mills Beach.

“We’re determined to not be put off by these events and will continue working to beautify the town,” she said.

The cliff and foreshore at Mothers Beach was covered with African boxthorn (also known as thorn bush), which was painstakingly removed by contractors before revegetation work using hardy native plants such as saltbush and correa could start.

Thousands of dollars have been spent on the area including at Schnapper Point, the promontory above the pier precinct where the Matthew Flinders monument stands.

Revegetation of the foreshore has been occurring for several years with grants from the state government.

About eight members of the federal government-funded Green Army will soon be planting an area around the recently opened, $450,000 toilet block at Mothers Beach.

Naturelinks, the shire’s main revegetation contractor, has also been working with volunteer groups at Mt Martha and Mt Eliza.