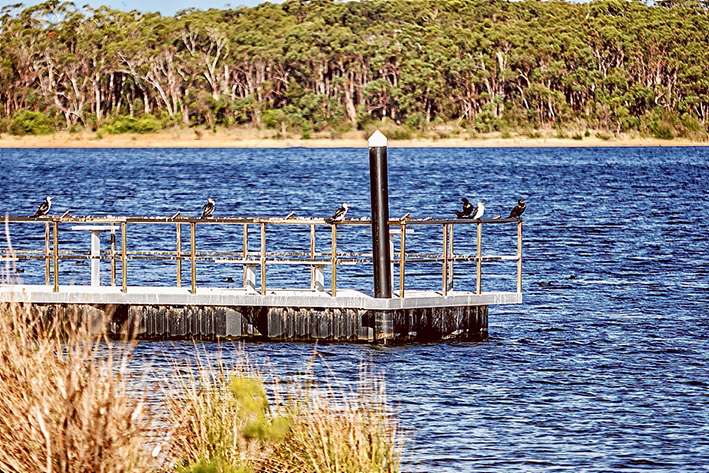 CORMORANTS are reported to have died in agony after baited fish hooks were purposely left on a small fishing jetty at Devilbend reserve.

The hooks had apparently been tied to the jetty, ripping out the birds’ throats when they attempted to fly off.

Rangers at the 1005 hectare natural features reserve have investigated the report and are closely monitoring the situation to make sure it does not happen again.

At least one incident of cormorant baiting at the Devilbend has been reported to the Department of Environment, Land, Water and Planning (DELWP).

“The department is now liaising with Parks Victoria regarding the alleged behaviour.”

Mr Burrows suspected the traps had been set by anglers upset at cormorants “pinching their fish”.

The 250 hectare body of water has been stocked with fish and anglers are encouraged to try their luck.

“The problem is also that fishermen generally are untidy, leaving behind their hooks and lines, but this was a deliberate act.

“Our committee was told that lines had been tied to the jetty, trying to snag cormorants.”

Mr Burrows said Devilbend was an “important bird area”, providing a home for up to 150 blue-billed ducks, “one of our rarest birds”.

He feared the ducks would be disturbed if kayaks were allowed onto the water at Devilbend.

A regular visitor to Devilbend said hooking the cormorants was “just wanton cruelty”.

“I’ve been hearing horrific stories from people who live locally about this wilful animal cruelty,” said the visitor who wished to remain anonymous.

“Apparently someone is trying to catch and kill cormorants by baiting hooks on fishing line with shrimp and fish and leaving them on the small pier alongside the lake there.

“When the birds fly off with the bait the hooks rip the birds’ throats and they die a terrible death.”

Reports of wildlife cruelty or destruction can be reported to the DELWP on 136 186.