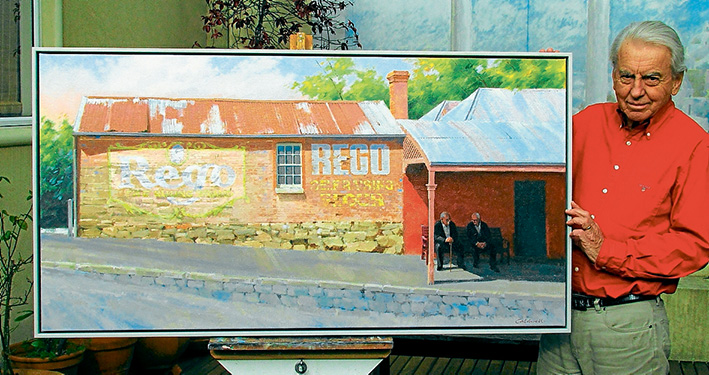 The society – membership by invitation only – has held an exhibition each year since 1918.

This will be the 13th year in a row that Caldwell has entered works in the exhibition.

His entries – six oils and one pastel – range from a portrait of former Mornington Peninsula Shire mayor Antonella Celi, which he entered in last year’s Archibald prize, to a seascape looking from McCrae towards Mt Martha and a still life pastel.

Caldwell, above, is pictured with Sign of the Times which depicts a 100-year-old building at Maldon, near Castlemaine in central Victoria.

“I had it in mind [to do] for many years and, in fact, did a small version years and years ago,” he said.

Caldwell, a member of the Twenty Melbourne Painters Society for 13 years, says other members have been there up to 30 years.

“Members seek to uphold the highest standards of traditional art and their exhibition continues to attract several thousand visitors each year,” he said.