Two on the move to beat arthritis 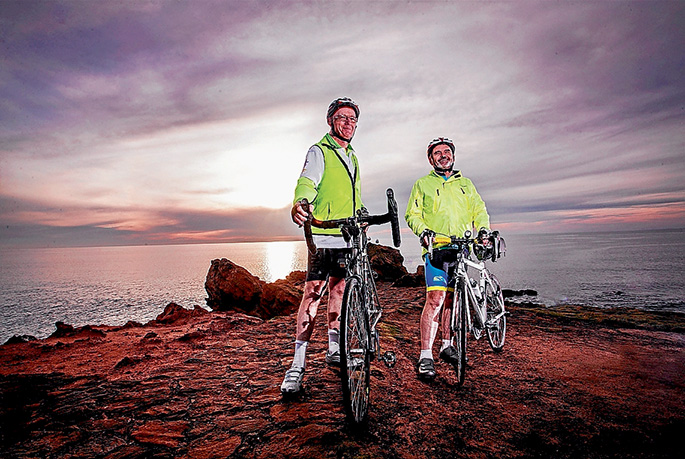 AS he pedals out of Dimboola with three days’ cycling from Melbourne behind him, Stan Proctor will be just beginning to enjoy himself, which is just as well because his destination will be Darwin.

His experience of long distance riding tells him that by the fourth day he will be riding for the pleasure of it.

“It’s pretty tough for the first three days regardless of the preparation you do,” says Proctor, who has previously ridden from Melbourne to Sydney, and on 27 September will set out to ride to Darwin.

“For the first three days your body is asking ‘why are you doing this?’ By the sixth day, when we got to Sydney, I could have kept on going at 150 kilometres a day, which is what we are going to do on the Darwin ride.”

The first answer to the “why” of it is that, for Proctor, of Mornington, the 3750 kilometre ride over 30 days is “kind of like my Everest. I am closing on 65 so there’s not going to be too many more years I can take on a challenge like that”.

But the bigger reason is that he is doing it to support his riding mate, fellow Mornington resident Mike McKenzie and his son Bradley, who have  both been diagnosed with ankylosing spondylitis, an inflammatory form of arthritis that attacks the joints of the spine.

Riding to raise awareness about arthritis and funds for arthritis research projects will likely help to sustain them on the ride, says Proctor, a 47-year RACV member.

Bradley McKenzie was 28 when he was diagnosed with spondylitis, and since then his father Mike has been diagnosed with the same form of arthritis at age 64.

Proctor also knows the pain of arthritis. A veteran of the squash court, he has it worst of all in his right wrist, but also in his hips and shoulders.

“It’s been a learning exercise for me. I had not realised arthritis affects people right across every age range. It can be people as young as Bradley, and younger still, that suffer.”

The fundamental message that Proctor and McKenzie want to demonstrate is that once you have arthritis it is important to maintain as much movement as possible. As a result, their theme, supported by Arthritis Victoria, is the “make a move ride”.

The two riders intend to use every seventh day as a rest day and, like footballers, will be seeking out cold water pools to revive their muscles after each day’s riding at an average speed of around 26kkph.

All going to plan, Proctor and McKenzie will be in Darwin on 25 October.

For more about the ride visit makeamoveride.org.au.

*First published in the July 2015 RoyalAuto, the RACV’s member magazine.