Long-awaited opening of pier on horizon 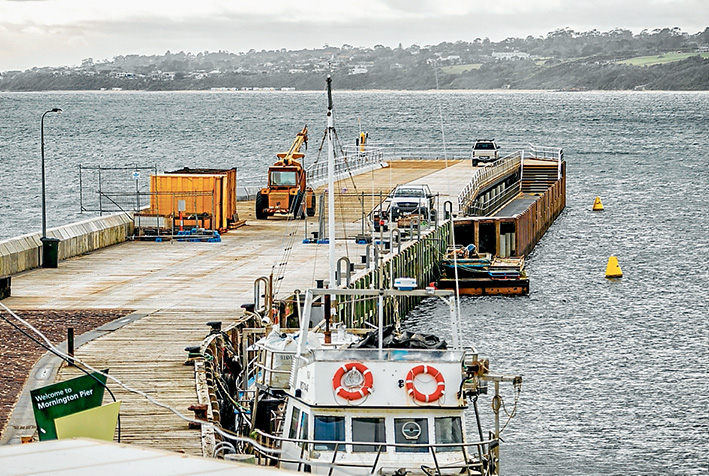 The long-awaited opening of the 75-metre, new outer section is unlikely to match the pomp and circumstance surrounding the opening of the original pier in the late 1850s attended by many of the 2600 residents in the district.

The genesis of a pier at Schnapper Point (as Mornington was called until 1864) occurred in 1856 when a Ports and Harbours Commission looking into the state of piers in the colony of Victoria met prominent citizens of the town in the village’s one and only pub, the Tanti Hotel, a version of which exists today.

Residents wanted the town to be connected to Melbourne by sea as poor roads were often impassable in winter. Construction of the pier started in 1857 and the commission spent £7000 on it between 1857 and 1861. The original budget was £4380 in 1856.

The modern state government through Parks Victoria has spent about $18.5 million on the pier since 2010.

Labor spent $3.5 million on the middle, 53-metre section of the pier in 2010-11 but did not have the cash for the outer section, which was closed in August 2010 after a series of storms damaged pylons and dislodged top deck planks.

In June 2011, The News reported the outer section was in danger of collapsing after engineers found 20 per cent of wooden pylons had failed or were about to fail and were not supporting the top deck. About half of the remaining 80 per cent were in “average condition” and the outer section was one big storm away from becoming irreparable damaged. Luckily that storm did not arrive.

In May 2012 the Baillieu state government announced it would spend up to $15 million to replace the outer section. The money was the lion’s share of the government’s $23 million for local port infrastructure upgrades that year with Mornington MP David Morris garnering plaudits for his lobbying efforts.

Work to replace the outer section started in early 2014 and was supposed to be finished in time for Christmas but was delayed due to a combination of bad weather (three big storms) and technical problems including reattaching concrete wave screens using a different, stronger system. Divers were part of the crew attaching each wave screen and could not work during rough weather.

The pier now has wave screens on both sides, designed to protect the harbour from storms that have damaged or destroyed boats anchored in the harbour several times since the 1980s including most recently in April 2008. The harbour remains unprotected from storms coming from the north to northeast quadrant.

Completion of the pier will be followed by renovation of the pier forecourt, which will include re-laying the cobblestone area, services upgrades, and new seats, lights and historical information signs. This will not restrict public access to the pier.