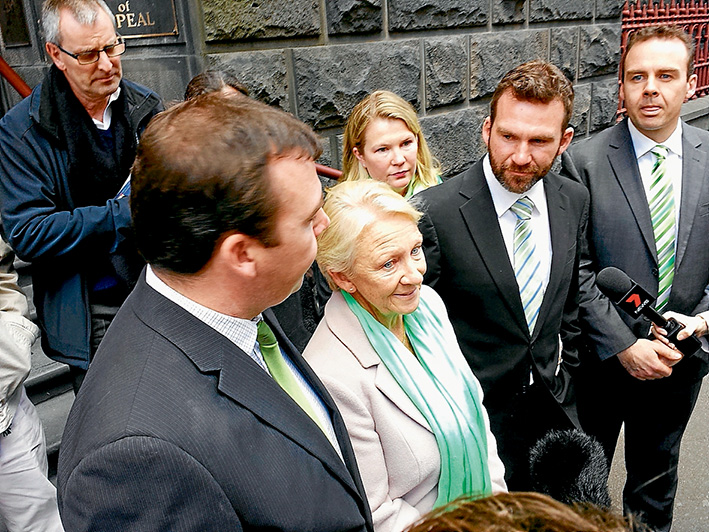 MORE than two years after the brutal murder of Hastings jeweller Dermot O’Toole, the appeal has been heard against the leniency of the 20-year murder sentence handed down to killer Gavin Perry.

The hearing, on Monday 20 July, was heard in front of three justices at the Court of Appeal.

The majority of the hearing involved often complex legal arguments revolving around the categorisation of the murder as a statutory one rather than a common law murder.

Gavin Perry’s legal counsel also argued over the five year sentences for the two other armed robberies he had committed prior to the murder.

Early in the hearing, counsel for the Department of Public Prosecution (DPP) told the presiding justices that the family wanted them to watch the CCTV footage of the incident to get an understanding as to the ferocity of the attack.

One of the justices replied: “This appeal is not run by the family”.

In fact, there was very little discussion at all of the specifics of the crimes or their lasting impact on the O’Tooles.

During the proceedings, the justices asked counsel for the DPP why they had appealed the leniency of the sentence, after downgrading the charge in the initial trial from common law murder to the less serious statutory murder.

“To avoid a trial and to end up with a charge that carried the same maximum penalty.”

The justices argued that by allowing a statutory murder charge Justice Hollingsworth had, in the original trial, been given a set or parameters to sentence within.

They also noted that it was not the role of the appeal court to move beyond those parameters.

“Sentencing decisions are for sentencing judges,” the justices said.

“Our role is to see if the judge went beyond the parameters.”

The justices asked why the prosecution believed the murder sentence should have been more than 20 years considering it did not appear premeditated.

It was argued that Perry was on parole at the time, that he was high on ice, and that the murder was committed during an armed robbery. All these factors, the DPP believed, should be taken into account.

The justices also noted that a 20-year sentence was the highest statutory murder sentence ever handed down in the state of Victoria.

In adjourning to consider their decision, the justices addressed the family of Dermot O’Toole in the courtroom.

“We understand that the family have an intense interest in the outcome of this appeal.

“We want to point out that sentencing parameters were fixed due to a plea of guilty to statutory murder i.e. unintentional killing.

“There has always been different sentencing for unintentional as opposed to intentional killing”.

Finally, before adjourning, the justices agreed to view the CCTV footage as the family had wished.

The O’Toole family may now have a considerable wait until the Court of Appeal’s verdict is handed down.

They remain hopeful that they will get justice for Dermot. The only barrier in their way appears to be the original decision to downgrade the charge from common law murder to statutory murder in exchange for a guilty plea.

In an attempt to expedite justice for the O’Tooles and avoid the stress and turmoil of a trial on the family, the DPP may end up inadvertently depriving them of the justice they deserve.