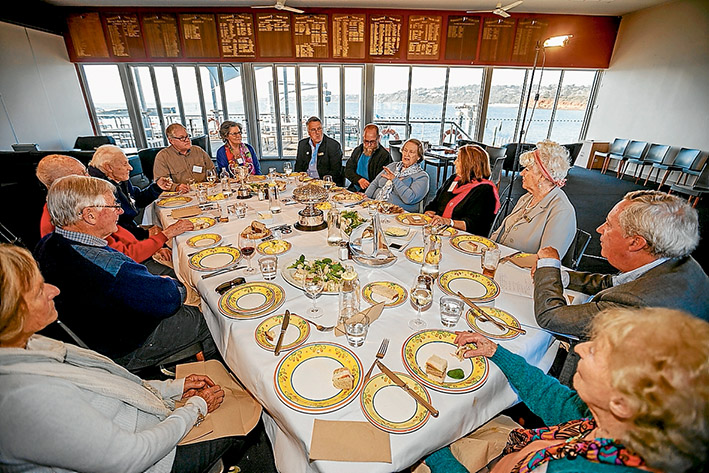 MORNINGTON Yacht Club has delved into the past to begin celebrations for its 70th anniversary in February.  In the search for historical information, it was fortunate in being able to locate several old salts who were sailing at the club from its inception in 1946 and well into the 1950s.

The four enjoyed a lunch at the club last week – the first time they had got together in 50 years. It was described as an intriguing time for the sailors who were obviously excited at meeting old sailing friends, having a chat, a laugh, and recollecting many old sailing stories.

Commodore Graeme Alexander thanked the elderly sailors for attending and presented each with mementos of the day. He invited them to attend the club’s 70th anniversary celebrations in February when their photographs would “take pride of place” in the club’s display.

The club formally began in 1946 under first commodore H Kinnear. Sailing and water activities were popular from the start, with the club and Schnapper Point holding a prominent place in the town’s history.

The history committee is seeking pictorial memorabilia, or information about the club’s history and its surroundings, including the club house, pier, storms, baths and beaches and, of course, yachts and fishing boats.

Those who can help should call 5975 7001 or email: office@morningtonyc.net.au