Stringer ‘best on’ in milestone 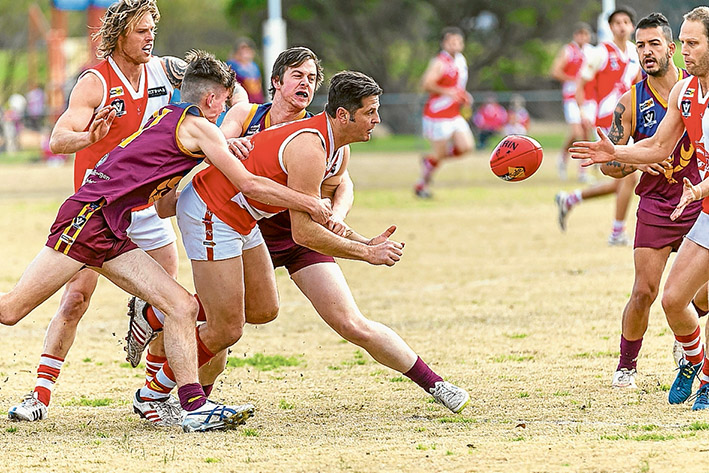 GUY Stringer celebrated his 400th game against on Saturday with five goals and a best on ground performance against Tyabb.

Stringer, suffering from a torn bicep which he carried into the milestone game, booted his first of five goals at the nine minute mark of the first quarter.

He dominated at centre half forward while fellow forwards Myles Pitt and Leigh Poholke booted 10 and seven goals respectively.

Tyrren Head continued his sensational season while Leigh Treeby absolutely ensured that he was at his best for Stringer’s big game.

Stringer will now miss the rest of the season after getting his bicep operated on this week.

Trent Urquart in his first game was the best of the Yabbies, while the evergreen Scott Pickerskill, who would have played a lot of footy against Guy Stringer, was also vintage in his performance.

A top three finish is again a very realistic target for Hastings after it caused an upset and knocked over Somerville.

In the match of the round, the Blues jumped out of the blocks and led by 20 points at the first change.

The Eagles’ defensive side was challenged by a four quarter effort on Saturday and it failed to respond.

The Blues however, were almost perfect. They were super impressive defensively first and foremost and then were able to make the opposition pay on the attack.

Dale Alanis has been in super form this season and he was again with four goals, while Luke Clark and the elusive Steve Robb booted five between them.

Matt Clifford was at his best, Paul Rogasch was unstoppable with two goals and Josh Mulheron was the winner of the ruck battle.

Timmy McGenniss was Somerville’s best and together with Adrian Ridout booted three goals, while Todd Farrelly and Kane McKenzie worked hard in the back half.

Rosebud maintained its position on top of the ladder with a hard fought, low scoring game against Dromana.

The Buds had 14 scoring shots to six in the first half but managed only an 18 point lead.

Tom Baker booted another four for the Buds while Jack Jarman and Rhys Bancroft were outstanding.

Kieran Voekl, Matt Jones and Christian Ongarello were the best of the Tigers.

Rye, along with Rosebud, have moved a game clear of Somerville and Hastings on the ladder.

Andrew Dean and Adrian Gileno again worked well together up forward with four goals each while Ben Winters-Kerr was outstanding in his small, pressure forward role, booting three.

Kris Bardon was outstanding for the second week in a row and Daniel Schwind was superb again in the ruck. ‘Schwindy’ has become a valuable tool for Rye coach Josh Moore and has made life tough for Rhett Sutton to get back into the team.

Daniel White, Kyle Arnott and Shayne Ainsworth were the best of the Magpies.

Devon Meadows were on show in the RPP Match of the Round on Saturday against Frankston Bombers and their response was a 14.16 (100) to 5.12 (42) demolition.

Troy Aust booted five and Dylan Hand four goals for the Meadows while Jayden Sullivan and Billy Hayes were superb.

James Degenhardt and Matty Windsor were the best of the Bombers, along with Sam Drake and the ever-consistent Jason Kingsbury.

Young gun defenders Luke Chandler and Jonah Siverson were outstanding once again for the Hillmen, while Daniel McNamara steered the ship in the back half.

Daniel Heijden worked hard for the visitors while Dylan Hoare and Ben Mitchell were also on top of their game.