Hillmen remain in the hunt 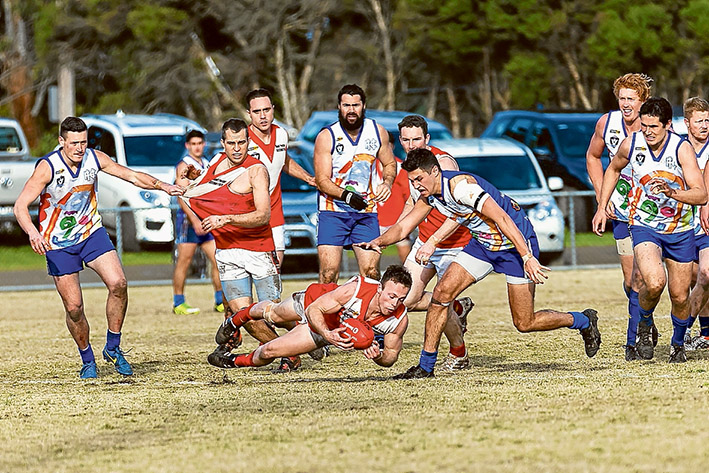 RED HILL kept its finals chances alive with a gutsy four-quarter performance against Hastings on Saturday at Thomas Barclay Reserve.

Whilst the Hillmen continued its push towards finals, Hastings let slip an opportunity to break away from other sides vying for a top three position.

It was the stars who shone yet again for the Hillmen, but it was teenage defender Jonah Siverson who really stood out playing in the back half.

Siverson has become a very valuable commodity at Red Hill and his form in the past month has been outstanding.

Sean Holmes was outstanding for the Hillmen too and played arguably his best game for the season with three goals. Harry Larwill’s transition from defence to attack continues to be a masterstroke by coach Tony Blackford too. Harry booted another three goals on Saturday.

Paul Wintle is a star but goes unnoticed most weeks. One can’t underestimate the significant contribution Wintle makes most weeks in defence.

Paul Rogasch led the charge for Hastings and Josh Mulheron again gave his smalls first use of the pill.

The Blues tackle Tyabb next week while Red Hill has the bye.

Rosebud maintained its position a game clear at the top of the Nepean Division ladder after leading all afternoon to beat Somerville.

The Buds opened well with first quarter goals to Jason Bristow and Tom Baker. They kept Somerville goalless in the opening 25 minutes of the match and led by 15 points at the first change.

Rosebud was able to maintain the momentum of the game for almost the next 90 minutes.

Tom Baker booted two goals in the last quarter to stretch the margin to 24 points, before Somerville came home with a rush, only to fall short by one straight kick, 9.7 (61) to 9.12 (66).

Rob Forrest returned to the Rosebud side after a broken jaw and didn’t waste any time booting three goals and collecting best on ground honors.

Matt Baker was a rock across half back and Greg Bentley enjoyed his second dominant performance against the Eagles this season. No doubt that Bentley saves his very best for the good sides.

For the second time this season, Crib Point pushed Sorrento to the wire.

The first time the sides played, Crib Point had a blistering final quarter and overrun the Sharks. On this occasion, the Pies booted six goals to four after half time but started their run too late and went down 6.11 (47) to 8.9 (57).

Jamus Campbell was superb again for the winners while Troy Schwarze was the instigator in getting his side over the line.

Brad Arnold led from the front for the Pies and James Cook played arguably his best game for the season.

If I was any coach looking to play finals, I’d be looking to sit down with Pies coach Duane Annable and shout him a cuppa!

The Meadows let themselves down in the first quarter when they squandered opportunities, booting just two goals from 10 shots at goals.

Rye on the other hand converted five of their seven shots and led by 12 points at the first change. The margin blew out to 34 points at half time and the game was done and dusted right there. The Meadows booted 7.6 to 4.5 after half time.

Andrew Dean booted four goals for the Demons while Jai Lloyd provided enormous drive from half back. Ryan Mullett also dominated through the middle of the ground.

Pat Harmes was again outstanding for the Meadows while lesser-likes in terms of reputation in Jayden Sullivan and Jack Henderson were also strong performers.

Zac Longham was at his absolute best for the Bombers with seven goals while Brett Sutton and James Degenhardt dominated.

Kieran Voelkl and Chris Ongarello were the best of the Tigers.

Pat Heijden booted 10 goals and was instrumental in the win while Ben Mitchell completely dominated. Alex Harnett was also impressive in his second game.

Jake Anderson booted five goals for the Yabbies and was clearly their best, along with Adrian Clay.