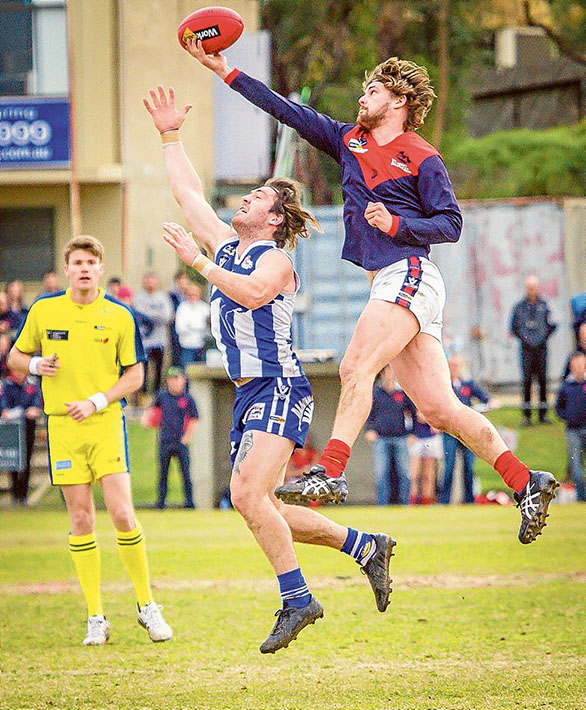 FRANKSTON YCW flexed its muscles on Saturday in the Peninsula League match of the round, thumping Edithvale-Aspendale by almost 100 points.

The Eagles came into the game having won five games on the trot, including against top five teams Pines and Mornington.

However, at no stage was the home team in the match against the Stonecats. They were held goalless in the first and third quarters, eventually going down 19.16 (130) to 6.3 (39).

The Eagles weren’t helped by the fact they were missing prime mover Tim Mavric and ruckman Aaron Pawel.

The lack of a ruckman meant the Matt Kremmer had to be moved from the attacking end to the middle, resulting in the Eagles losing their ability to stretch YCW defensively.

The bulk of the forward work was left to Jarrod Garth, who competed hard and booted two goals.

Matt Clark was clearly the Eagles’ best with more than 20 touches through the middle of the ground.

Frankston YCW on the other hand was superb. It’s going to take a super effort from a very good side to stop this club win another premiership.

Anthony Barry was the best player on the ground, controlling things from half back, while his cousin Byron wasn’t far behind him.

Ash Eames was unstoppable in the ruck and gave first use to his small men all day, including Tony Lester, who finished with 21 possessions and two goals.

The likes of James Credlin and Ryan Santon don’t get a lot of attention but are growing in confidence each week, while Luke Collins is really starting to find his way.

The only sad note on what was otherwise a sensational day for the Stonecats was the knee injury to Ben Buckley. Buckley was starring for the Stonecats but twisted his knee with just three minutes of the game left on the clock. He was stretchered from the field.

Watching Frankston YCW play opposition sides is like watching boys versus men. The body shape of the Stonecats is far superior to that of any other side and this is the reason they are going to be hard to stop come finals time.

They don’t have a weak link. They have wonderful leadership, a self confidence that is undeniable and an enormous appetite to win.

The Tigers gave marching orders to their coach Ben Crowe on Tuesday night before training after Crowe resigned his position midway through the season.

Despite Crowe committing to the club for the remainder of the season, the club decided it was best if he didn’t see out the year.

Crowe said he understood where the club stood, however, conceded he was disappointed with the way it ended.

“I thought I had the support of the club and the players to finish the season but obviously that wasn’t the case,” said Crowe.

“You find out things that you were blinded by when everything unfolds and it seems that there were people at the club who didn’t support me. That being the case, the club officials had to do something about it”.

Crowe said he would weigh up his future over the coming weeks.

“If I play in Nepean, it will be with Somerville. However, I have a lot of mates at a lot of clubs – Pines, YCW, Mt Eliza, Edithvale-Aspendale.

“There’s going to be a lot of speculation on where I play next season but it couldn’t be further from my mind right now,” said Crowe.

Dale Nolan was dominant with six goals and Jackson Calder was dangerous also with four while Jake Smart finished with three goals in his best senior game for the club.

Rory Gregg worked hard in the ruck for the Gulls, while Matt Gardener tried hard up forward with two goals.

The Pythons set up the win with a seven goal to one first quarter. The Sharks booted nine goals to seven after quarter time.

Guy Hendry starred for the Pythons with five goals while Aaron Edwards with four and Corey Ash were outstanding.

Gary Carpenter and Jackson Sole led the way for the Sharks, along with Lachy Gill-Renouf.

Ricki Johnston was clearly Langwarrin’s best again, along with Blake Peach, who finished with two goals.