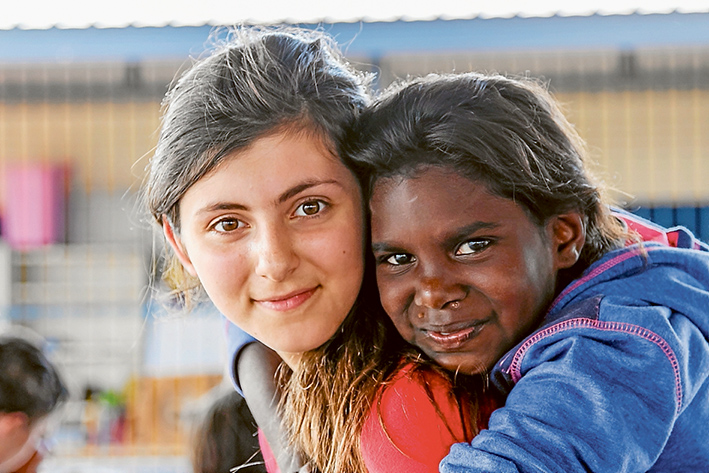 Arm in arm: Sidnee Goda, of Penbank and Demi Bush of the Wugularr School, above, and Lorraine Bennet and Chris Dinnage, below, during the recent visit to the Northern Territory.
Share
Facebook Twitter LinkedIn Pinterest Email

THIS month marks 40 years since Prime Minister Gough Whitlam ran soil through the hands of Vincent Lingiari stating: “I want to acknowledge that we Australians still have much to do to redress the injustice and oppression that has for so long been the lot of Black Australians”. Whitlam then added: “This land will be the possession of you and your children forever.”

In reply, with trust implicit in Whitlam’s pledge, the softly-spoken elder decreed: “Now we can all be mates”.

It is now August 2015 and the question is raised – are we mates? Have we fulfilled the promise of optimism and hope that were so evident in Vincent Lingiari’s words? There are two groups of primary school-aged children, separated by four thousand kilometres of red dust and eucalypts, who definitely are mates. They are children who have learned to respect each other’s upbringing and outlook on life. Who appreciate that it is OK to be different and that it is important to be non-judgemental. Who have an optimistic sense for the future and would want what is best for each other.

These children call themselves Wugubank. One group belongs to Penbank, an independent primary school at Moorooduc. This school, like many others, espouses tolerance, kindness and an appreciation of the natural environment. It is a school where children are challenged in their thinking to be inclusive of all, and to be grateful for the beautiful country in which they are privileged to live.

People are valued, no matter what their nationality, race or colour. But none more so than their friends in the second group, who just happen to be first Australians from the Wugularr School in the Northern Territory.

Some time ago, Penbank’s head of campus envisioned a more authentic educative approach to our children’s learning and understanding of indigenous culture. A conversation began with leaders from the Wugularr community in western Arnhem Land, considered to be remote, 90 minutes south-east of Katherine.

From this conversation an idea was born to bring a group of indigenous kids to the Mornington Peninsula for a week. Although this initial trip brought significant challenges, not the least being the cold southern weather, it was obvious that the experiences shared between the children were inspirational.

A return visit by the Penbank children to the Top End was a “non-negotiable”; it had to be undertaken.

The school has now completed six such visits. Each sojourn grows in stature and enjoyment. The two communities, thousands of kilometres apart, openly offer their hearts and homes to the visitors from afar. Shared experiences have led to strong bonds of friendship, for children and adults. It is a cherished, trusting relationship.

Over the past fortnight, 44 of Penbank’s years 5 and 6 pupils, along with adult helpers, engaged in the routines and delights of community life in the Northern Territory.

Corroborees were danced and there was group singing at the community’s Walking With Spirits music festival, swimming and fishing in the Waterhouse River. Elders explained rock art and dreamtime stories associated with various animals and artefacts, there was a cruise on the Katherine River at Nitmiluk which helped explain the importance of the landscape to the Jawoyn people.

When it came time to say “boh, boh” (farewell) the Penbank pupils reflected on what they had experienced and learned. Apart from the obvious fun that was had, deeper emotions of understanding and sadness emerged. We saw first-hand how these people are so connected to their land, their country. It is pivotal to their feeling of self-worth, their identity. We witnessed the strength of family ties, particularly at corroboree where we saw inter-generational participation.

Our children said they had learned the importance of “sharing, not having”. We obtained a glimpse of the very deep understanding that our first Australians have of the unfolding of the seasons and the signs of life and growth that accompany each change. We learned how to look for and find bush tucker, how to wash ourselves with bush soap and how to stuff our pillows with bush cotton! We were made acutely aware how crucial it is to listen to your elders and heed their advice. Indigenous culture decrees that it is not about “me and my”, it is about “we and us”.

But most of all we learned that these children are our friends, and always will be.

Children thirst for knowledge. They also delight in imaginative creativity. From our indigenous friends we learn how these aspects are combined in the power, wonder and magic of story-telling. Their law tells them the right way to live. It teaches them discipline, how to live peacefully and how to care for the land. If the land is looked after properly, the land will feed and protect them. How to live in harmony.

We now wish to find out more of this amazing culture. Who are the indigenous heroes? What tales of exploration and endeavour can be told from past millennia. How is it that rock art drawings in Arnhem Land accurately depict the thylacine (Tasmanian tiger)? Our children loved the open expression of creativity through dance, movement and song. We were enthralled with the pure beauty of the country. Most of all, we were charmed by the warmth so obviously displayed in the gatherings of the people.

As educators involved in such a positive, potentially life-changing program for young people, what to make of the furore involving Adam Goodes on our return to Melbourne?

Instinctively, a first response is that it just not fair, or kind, to treat any person in such a manner.

If the core of the issue is related to deep-seated, subconscious feelings of racism, then the saddening reality is that we have a major problem.

It falls to our leaders, of all pursuits, to engage in re-imagining how we view indigenous culture; what do we truly know of it and what appreciation do we have. No doubt, education will be a key in transforming viewpoints and understandings. But it must be informed with, and by, indigenous voices.

By example, our first Australians belong to the oldest, living continuous culture on Earth. In a time when the United States’ President Obama is declaring that climate change is the greatest challenge that our planet faces, it is worth noting that our first peoples have lived through, and survived, catastrophic climate change in the past 10,000 years. Would it not be ironic if we eventually turned to our indigenous elders to seek advice as to how to survive the next catastrophe?

There is a view that we are what we teach our children. If that is the case, let’s hope that the children are right in their thinking – that they have a positive mindset for the future and are informed, non-judgemental and appreciative of the wonder of the world that surrounds them.

In our minds, indigenous culture is a life force which should be celebrated, praised and looked upon with immense pride. There is so much that we can learn from our friends.

Our children are inspiring their immediate and extended families to learn more of their friends’ way of life; to appreciate and embrace a civilisation like no other.

In our endeavours we are not trying to change the world. We see our efforts as but one small action in the process that we hope will lead to authentic reconciliation. Above all, hopefully with Vincent Lingiari’s blessings, we are mates and will continue to be so.

We can say, with surety, that our children at Penbank would never boo an indigenous Australian.

* David Quin is a teacher at the Woodleigh School’s Penbank campus.