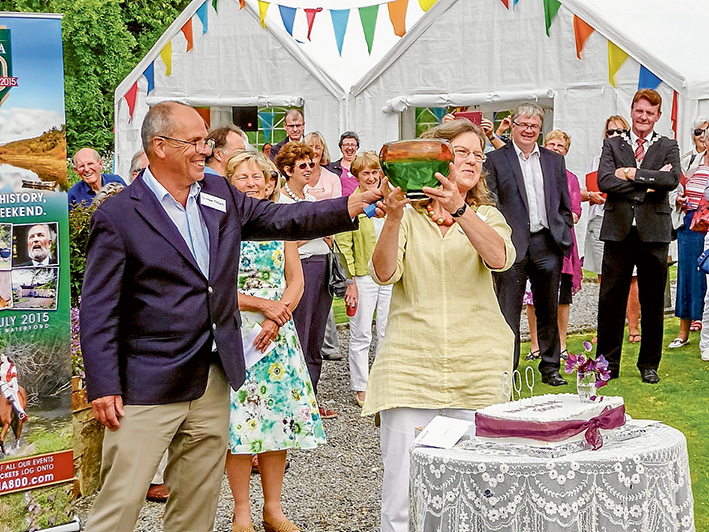 MISSION accomplished. Dedicated readers of this journal may recall Cr Graham Pittock being invited to visit Dromana House, Ireland, to help celebrate the 800th anniversary of the FitzGerald family’s occupation of the land on which the latest dwelling (circa 1780s) stands.

Cr Pittock, whose ward includes Dromana, flew to Ireland with his wife, Prue, to the celebrations. They are now returned safely to their slightly younger parcel of land, with a tale or two to tell. The stories involve several bottles of Dromana wine and a rather nice green bowl, a gift from Dromana to Dromana House. And a cherry tree.

First, the wine. Three carefully chosen bottles were safely placed in the Pittock luggage, along with the green presentation bowl, all cushioned amid shirts, socks and smalls to avoid breakage. They arrived intact at the Pittocks’ Irish lodgings after the long trip.

But, as must occur in all Celtic sagas, tragedy struck, just metres from the bottles’ destination. The carton in which they were being conveyed to Dromana House to accompany the celebratory meal opened like a bomb bay door, launching one precious bottle toward the soft Irish sward across which Cr Pittock was walking.

The lawn was edged with a narrow concrete strip, just metres from the house, with the inevitable consequence. How many kilometres had the bottles been conveyed without incident? How many hours of worrying about their safe arrival? However two bottles survived: they made it inside safely.

The green bowl was presented intact to Barbara (Villiers-Stuart) Grubb, who as head of the family had issued the invitation to the Pittocks to celebrate the anniversary at the family demesne – land attached to a manor – standing proudly above a turn in the River Blackwater near Lismore in County Waterford, southern Ireland.

Finally, the cherry tree. Cr Pittock was invited to plant a sapling to commemorate the Ireland-Australia Dromana link and an old family story. A tree was to revive the tale of an ancient relative, Katherine FitzGerald, Countess of Desmond (circa 1504-1604).

The countess’s tale is worth retelling. She was known by writers of the period, including Sir Walter Raleigh, as “the old Countess of Desmond”, who, it was said, lived to 120 years and more – some say 140. Others less romantically inclined insist it was a mere 100 summers.

She met her end, so the story goes, after falling from a tree. Some say it was a nut. Others say a cherry, up which she had shinned to gather a snack. Cr Pittock accomplished this “active and special role” which the invitation had vaguely mentioned.

The anniversary celebrations were a roaring success, taking in the nearby village of Villierstown and including a boat ride in the motor launch Maeve Og along the Blackwater, which, sadly, is not as fish-rich as it used to be. The event has kicked off another 800 years of family history, the story now requiring an aged countess to ascend the new cherry tree in about the year 2400 for a snack – but with family members standing below in case of mishap.

And surely we can confidently anticipate that the “disaster” of the broken Australian wine bottle will be woven into the Dromana House annals.